8 Reasons Why Prowler Is a Great Villain

We shed light on the Prowler’s best attributes.

It must be hard to be the Prowler. An incredibly talented inventor, driven, in excellent shape, and, yet, always, seemingly, stuck as the opening act for the Friendly Neighborhood Spider-Man.

We here at Marvel.com dedicate ourselves to righting such injustices. Allow us to shed light on the Prowler’s best attributes and why he deserves to be a headliner.

While Hobie Brown made his money as a window washer, his passion always brought him to invention and innovation. That meant that he could not be satisfied with the usual mechanics of his given trade, slowly and steadily modifying and adding tools to make him a better and more efficient worker.

Dalliance with the Dark Side

Despite his dedication to his job, he still ended up laid off. Angry and frustrated, he turned his inventive spirit towards creating a villainous alter ego for himself. However, in the midst of his first criminal act, he met Spider-Man and became so inspired that he left crime in that moment, deciding his inventions would be better used to be a hero.

Unlike many, Prowler did not let the door of rehabilitation slam behind him. He has consistently extended the same opportunity to others, treating other reformed criminals with trust, respect, and dignity. This, perhaps, has been best demonstrated with his membership in the Outlaws, a team of villains turned heroes. 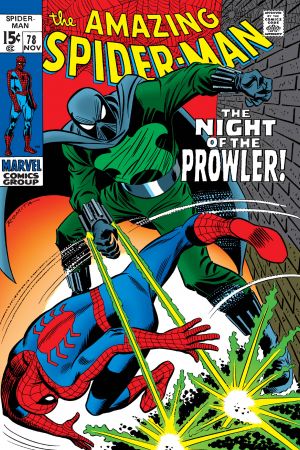 Over the years, Prowler has repeatedly proven himself a strong ally of Spider-Man. Perhaps the most noteworthy act of loyalty he has performed has been the multiple times over the years he has donned the Spider-Man costume to help Peter Parker avoid having his identity revealed or otherwise assist the Wall Crawler in his crime fighting commitments.

Prowler, however, does not blindly give allegiance. For instance, when Captain Stacy died and Spider-Man became named as the number one suspect, Brown donned his costume to chase after the arachnid. A good man had died, and until he found otherwise, Hobie intended to bring in the person—no matter who that might be—who did the crime

During another time when the Webhead had been accused of a crime he did not commit, Parker made the decision to ditch the webs and instead adopt four new identities to fight crime and clear his name. Prowler stepped up to aid his ally, providing him with the armor that would become key to the Hornet identity.

Hero Out of Costume

Hobie Brown also has a history of balancing his heroic identity, his career in construction, and his personal life with a volunteerism streak. Most often, this has been seen in the form of him acting as a Big Brother to a NYC youth, even as it has forced Brown to experience further tragedies, such as when one of his mentees, Manuel Lopez, became caught up and murdered in a gang conflict.

He Finds a Way

The Prowler, over the years, has suffered countless setbacks included paralysis and, most recently, death. And yet, he continues forward, never content to succumb to desperation or self-pity.