The artist gives us a preview of CAPTAIN AMERICA #698 before its release on February 14.

Sit back, relax, and gaze in wonder at an exclusive look at Chris Samnee’s art for CAPTAIN AMERICA #698, out February 14 in the gallery below! The issue marks the kickoff of Samnee and writer Mark Waid’s big “Out of Time” storyline and the lead-up to the blockbuster CAPTAIN AMERICA #700!

Cap’s in a strange new future, and Samnee’s having a ball imagining it! Here’s what the artist told us about his work in the upcoming issue.

Marvel.com: Chris, we’ve procured three pages from CAPTAIN AMERICA #698, so let’s jump around for a look-see at them. Seems like Cap’s pretty mad on page 7; what are your thoughts about drawing Steve when he’s this angry?

Chris Samnee: I think Steve is a ball of emotions just like the rest of us, but outwardly he looks calm, cool and collected. He has a resting chill face. But, as in any scene, I try to put myself in each character’s respective shoes and do my best to make these lines on paper appear to emote.

Marvel.com: Hey, we’d never want to get him mad at us. What were your inspirations for designs of the tank and the soldiers on page 6?

Chris Samnee: I wish I had a better answer for this but honestly, for both the ground troops and tanks, I was just winging it. Everything was designed on the page as I went. Spangly plus “Escape from New York” and go…

Marvel.com: Okay, okay, but listen; you’ve got to tell us something about the little dog guy on page 3!

Chris Samnee: Mark said to fill in the group with whatever I felt like drawing, but none of the characters—with the exception of Liang—actually had names in the script. In the first draft of page 2 Mark named three of the crew that didn’t make it: Dog, Amber and Tyrus. So I used those three names as my jump off point characters and asked Mark if he wouldn’t mind coming up with different names for the casualties.

Amber has near bulletproof translucent amber colored skin, Tyrus is the blue/purple older fella with the white hair and Dog is well, a dog. Everyone is affected by the radiation in their own way and this random stray dog mutated into a walking, talking anthropomorphized Good Boy. I just thought it would be something fun to keep me entertained in the middle of drawing all of this post-apocalyptic looking stuff. 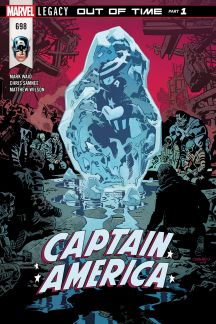 Marvel.com: We see a lot of different, well, mutations in figures on page 3. What went into their designs? Did you have a free hand in coming up with those, too?

Chris Samnee: Same as above. Random radiation disfigurements and mutations. Nothing specific spelled out by Mark in the script. I just let my mind wander and came up with this motley crew as I was inking.

Marvel.com: And lastly, the sound effect at the bottom of page 7—what’s your philosophy on their use? Does Mark always dictate those, or is that within your artistic purview? When to use them and when not?

Chris Samnee: Oh, I’m a big proponent of artists drawing sound effects into their pages. It just makes the art work better as a whole. I’ll sometimes add little ones here and there if I think the page needs it but for the most part, as is the case here, Mark wrote out the onomatopoeia in the script.