Didja Know... A Few Astounding Adventures of the Avengers

Crack open a few mags on Marvel Unlimited, folks, and you'll find that the earliest tales of Earth’s Mightiest Heroes are burstin’ at the staples with titanic twists and turns that have defined the age of Super Heroes ever since. And Marvelites, didja know that when it comes to the amiable Avengers, there can never be enough analysis of those outstanding origins? We think ya did!

Dust off a few of those first floppies with us now, Frantic Ones, as we dig in once more! Away!

Sure, some of you stalwart soldiers of the Merry Marvel Marching Society already accept this fantastic fact, but there may be a few out there who may not yet be elucidated to the deets, dig? Hey, this is important stuff!

So, before Cap swung his mighty shield in AVENGERS (1963) #4, the assembled ranks of Earth’s Mightiest Heroes could only make do with the likable lineup of Thor, Iron Man, the Hulk, Ant-Man, and the winsome Wasp—how did they ever manage? Yep, that’s right, True Believers; they had to struggle along to scuffle with the likes of Loki, the Sub-Mariner, and the Space Phantom—remember him?—without the Sentinel of Liberty for three whole issues! 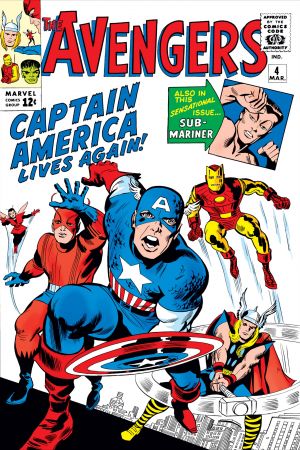 Luckily for them, and for the rest of us Face Fronters, Captain America thawed out and took his place at the side of his fellow costumed crimebusters, and later even led them to greater heights of herodom. And here’s an extra Didja Know for ya, since you’ve been so good about everything to this point: Cap was made an honorary Founding Member of the team in 1998’s AVENGERS #3, just so those of you who thought he’d been there since the start won’t feel sheepish!

When one looks back through the first ten tales of the mag, it’s plain as the X-Men comics in your collection that Stan and Jack and Don and the whole crew had the throttle on that train open as wide as it could go and were barrelin' along at top speed…and in the process they dropped enough references to other Marvel mags that the continuity grew by leaps and bounds.

Take AVENGERS (1963) #5, for instance: The Lava Men fearlessly featured in the story sprang forth from JOURNEY INTO MYSTERY (1952) #97, while the malevolent Masters of Evil debuting in AVENGERS (1963) #6 were brought together from the four corners of what was then the early Marvel Universe, making that ish a cavortin’ compilation of Editor asides in little boxes at the bottom of the pulse-pounding panels! It was a veritable carousel of credits for young fans concerned with collecting continuity! 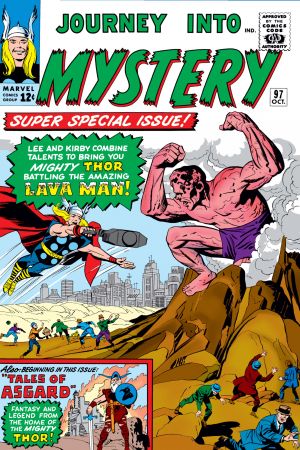 One of our most-favorite eye-catching examples of this wondrous world-building has to be AVENGERS (1963) #7, wherein we glimpse our terrific team tong-wagging at Iron Man for not taking their call for help. Why, you worriedly wonder? Well, as explained by yon Editor, the Armored Avenger had his own personal problems as seen in IRON MAN (1968) #56! Now, Lee and Co. didn’t have to add in that extra energy, but they did and Marveldom Assembled can now bask in the warm glow of yet another early building block of our fabulous firmament, Effendi!

Didja Know… one of the first new Avengers members died in their first outing?

It’s a dangerous job, but somebody’s gotta do it, right? Each and every member of the Avengers knows the score going into it, and the odds are when you fight the fiendish foes they do, someone’s bound to get hurt…or worse. Here’s the tale of a titan who checked in and checked out in one single story.

Earth’s Mightiest Heroes met Wonder Man in AVENGERS (1963) #9 and were immediately astounded by his strength and scintillating speed and stamina, marking him as a “one man army,” in the words of the high-flying Wasp—and who are we to argue with her? Problem was, ol’ Wondy was in deep with the dastardly denizens of the Masters of Evil. 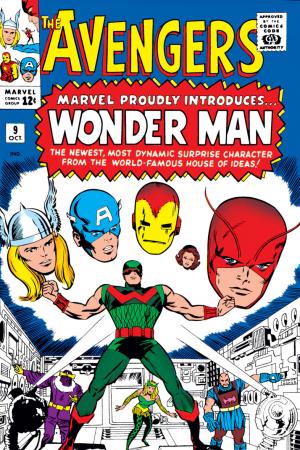 It all blew up in everyone’s masked mugs, of course. By the story’s soliloquy, the Avengers knew the sinister score, but it was way too late for the likable loser labeled Wonder Man. He’d been in Baron Zemo’s purple pocket and paid the price with his life. Hmmm, too bad nothing else ever occurred with him. We mean, other crazy cut-ups have come back from death’s door, huh? Why not Wondy? What? Oh…never mind!