Celebrate the super spy’s new series with a look at his first appearance!

He might share a name with one of the most infamous people in the Marvel Universe, but Nick Fury plans on making a reputation for himself with his self-titled series launched this week by writer James Robinson and artist ACO. The new book may have sent Fury to the French Riviera and put him in direct opposition to Frankie Noble, but his comic book roots go back to the 2012 series BATTLE SCARS.

Chris Yost, Matt Fraction and Cullen Bunn collaborated to write the six-issue BATTLE SCARS with art by Scot Eaton. The series, set during the Fear Itself event, kicked off in Afghanistan with the 2nd Battalion Army Rangers trying to figure out why everyone seemed to be shooting everyone else. Here we’re introduced to Staff Sergeant Marcus Johnson who winds up in Atlanta, Georgia four days later after getting word that his mother, Nia Marie Johnson, passed away. Just as he began to realize that someone specifically wanted his mother dead, he’s pinned down by sniper fire and attacked by a wetworks squad backed up by none other than Taskmaster. Luckily, Captain America and then-Director of S.H.I.E.L.D. Daisy Johnson stepped in to help Marcus.

S.H.I.E.L.D. tried keeping him safe in their rebuilt headquarters, but Marcus broke out, took down an entire group of their agents, and started his own investigation into Taskmaster along with his Ranger pal “Cheese,” otherwise known as Phil Coulson! The search not only lead to another fight with Taskmaster, but a team-up with Deadpool against the Serpent Society and the revelation that a masked man calling himself Orion stood as Johnson’s true enemy. 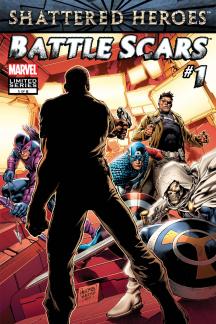 Another masked man soon revealed himself not only as Nick Fury, but as Marcus’ father. The elder Fury met Nia Johnson when they both worked for the CIA 30 years prior. The two hit it off and nine months later Marcus entered the world. Nia quit that job and Fury worked his spy magic to keep her safe until recently when someone uncovered the information and sold it to Leviathan leader Orion. Fury messed Orion up pretty bad and the continually-dying villain wanted some of the Infinity Formula to fix his problem, but the only real source remained in Marcus’ blood.

Soon enough, both father and son wound up in Orion’s clutches. He had his goons cut out Marcus’ left eye to make a family resemblance. Orion then received a transfusion from Fury that restored his power and youth, but a presumed dead Marcus fought his way through Orion’s goons. Johnson stalled the villain long enough to get the Avengers there to back his play and save the day, seemingly killing Orion in the process. A few weeks later, Marcus shaved his head, joined his pal Coulson and became official Agents of S.H.I.E.L.D. He also decided to take on his father’s name as a way to honor him and carry on a longstanding tradition with the organization.

Nick Fury Jr. may have first appeared in the Marvel Universe as Marcus Johnson in BATTLE SCARS, but the idea for an African-American take on the character debuted back in 2002 when he showed up in THE ULTIMATES #1 by Mark Millar and Bryan Hitch looking an awful lot like Samuel L. Jackson. A noted comic fan, Jackson appreciated the nod and, by the time the Fury character made his big screen debut in 2008’s “Iron Man,” Jackson filled in the eye patch and long coat!