The king of Wakanda finds his queen as Civil War rages and more!

The Black Panther went on the prowl for a wife in New York in BLACK PANTHER #10, but after Monica Lynne turned him down he approached Luke Cage with a job offer. Then, in BLACK PANTHER #11, the criminal overlord called Han sent the Hand against the Panther and Cage when T’Challa refused to wed the villain’s daughter.

Later, the two heroes flew down to New Orleans in BLACK PANTHER #12 to help in the aftermath of a hurricane, but ran afoul of vampires. With the help of Blade and Brother Voodoo, they staked their claim to victory over the bloodsuckers in BLACK PANTHER #13.

After returning Cage to New York in BLACK PANTHER #14, T’Challa jetted back to Wakanda and proposed marriage to Storm of the X-Men, whom he’d loved for many years. She accepted his proposal in BLACK PANTHER #15 and together the happy couple announced their engagement publicly in BLACK PANTHER #16 and began to issue invitations to the impending nuptials. 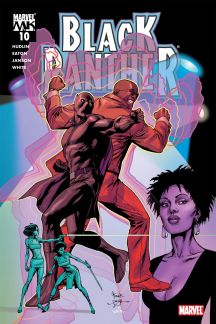 Following a bachelor party thrown by Luke Cage and Wolverine in BLACK PANTHER #17, T’Challa and Storm made their vows to each other in BLACK PANTHER #18. Reed Richards approached the Panther in CIVIL WAR #3 to issue a request from the U.S. government for aid in tracking down rogue super heroes, but the king of Wakanda refused, saying his nation must remain neutral.

When he could no longer avoid the repercussions of the struggle between Iron Man and Captain America, Black Panther joined Cap’s underground resistance fighters to storm Stark’s secret prison in CIVIL WAR #6.