One of T’Challa’s greatest foes returns, plus Skrulls and more Skrulls!

Upon returning to Earth, Black Panther witnessed the final defeat of The Hulk by the Sentry and Tony Stark in WORLD WAR HULK #5, and found his sister Shuri and friend Monica Rambeau kidnapped by Erik Killmonger in BLACK PANTHER #35. The king of Wakanda made plans to invade neighboring Niganda to rescue the women in BLACK PANTHER #36. 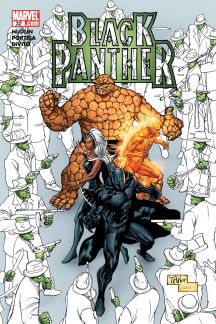 Once in Niganda, T’Challa entered into mortal combat with Killmonger in BLACK PANTHER #37, while his Wakandan forces moved to rescue Shuri and Monica. Upon spotting the Panther felled by his foe and about to be executed in BLACK PANTHER #38, Rambeau used her energy powers to zap Killmonger dead.

During Secret Invasion, the shape-shifting Skrulls invaded Wakanda to seize its precious vibranium stores in BLACK PANTHER #39, but T’Challa rooted out all spies in his midst before being confronted with the awesome Super-Skrull. 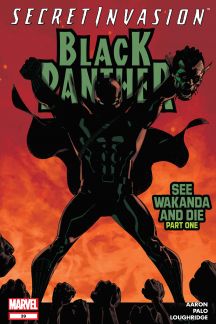 The Panther fought and defeated The Super-Skrull in BLACK PANTHER #40, though he found himself faced with two more soon after. A traitor close to him spoiled the moment, leading to T’Challa’s capture by the invaders. He managed a clever turnaround of the situation in BLACK PANTHER #41, allowing him and his people victory over their alien opponents.