The FF's fifth anniversary was marked by Doom stealing the Silver Surfer's powers.

Traditionally, you celebrate a fifth anniversary with a gift of wood. The Fantastic Four would have probably appreciated a discarded piece of drywall instead of the challenges Stan Lee and Jack Kirby threw at their heroes in the pages of FANTASTIC FOUR #57–60! 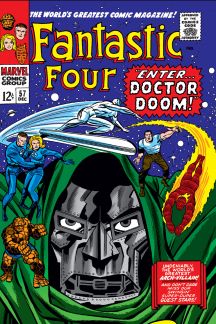 The adventure began with Reed, Sue and Ben getting duped into thinking Sandman and The Wizard planned on confessing to their crimes as a ruse to break out of prison. Sandman succeeded, which Wizard said was part of their plan, but the team felt blindsided by their efforts. Later, Sandman attacked the FF in their own home and made off with some of Mr. Fantastic’s equipment.

Meawhile, Doctor Doom worked on a scheme of his own as he invited the Silver Surfer to visit Castle Doom. Intrigued, the spaceman accepted and demonstrated his astonishing mastery of Cosmic Power to the Latverian leader. The Surfer would live to regret this display and the trust he placed in his host as Doom distracted his guest and then stole his power!

To prove himself, Doom rode the Surfer’s board to Manhattan where he crashed through the FF’s headquarters only to find the Thing there. The ensuing battle tore through the Big Apple until the villain used Vibration Rays to slow Grimm to a standstill, turning him into a temporary statue! 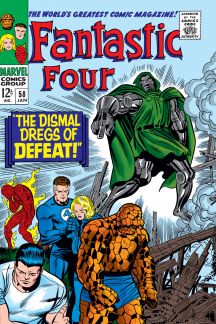 The souped up despot then made his way to the Southampton cottage the Richards’ had rented for some time away. Around this time, Lockjaw landed Johnny Storm and his pal Wyatt Wingfoot back in New York City as well. The trio had been fruitlessly searching for a way to find the Inhumans. Facing a new problem, Johnny saw the frozen Thing and then zoomed to the cottage to save his sister and brother-in-law from Doom’s attack.

Even though things got pretty hot during his fight with the Human Torch, Doom decided to simply leave the reunited Fantastic Four as they were. In his eyes, seeing Doom take over the world would prove a far worse punishment than actually killing them.

Doom’s arrogance would lead to his ultimate downfall. Richards appealed to the worlds’ governments to focus their efforts against Doom, but – after Ben gave him a walloping dose of motivation – he got to work developing a device that would weaken the villain. 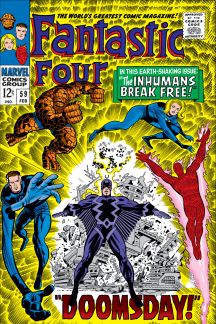 With time running out before Doom fully took over the planet and then moved on to the stars, the Fantastic Four jumped into action against the madman. Torch did his level best to fry the bad guy to no avail. Then Thing jumped into the ring to fight the foe for a second time. That gave Mr. Fantastic enough time to unleash the Anti-Cosmic Flying Wing.

The doohickey did the job of zapping and angering Doom while absorbing some of his power. However, the real reason for its presence came as it flew up into space where the bad doctor soon lost his power! As Richards explained, when Galactus stranded the Silver Surfer on Earth, that included his Cosmic Energy. When Doom passed a certain point, he lost the power! With that, Doom returned to his usual level of power and the board made its way back to the Surfer. 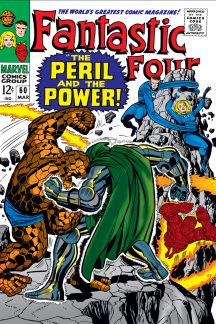 It didn’t quite play into this particular story all that much, but Stan and Jack also finally released the Inhumans from their captivity. After Black Bolt told the citizens to hide underground tunnels, he unleashed the power of his voice to destroy the walls, and much of the city in the process. The Council of Elders then informed the Royal Family – that’s Black Bolt, Medusa, Gorgon, Crystal, Triton and Karnak – to return to the human world. Never let it be said that Lee and Kirby didn’t pack as much action and intrigue as possible into these big anniversary stories!

Stay tuned to Marvel.com for more on Jack Kirby’s legacy and join the conversation on all of our social channels with the hashtag #Kirby100.