A brief dossier on the life and times of the malevolent prankster Madcap.

The boy—real name never revealed—that would someday be Madcap experienced a relatively average childhood. A quiet religious lad in a quiet religious family, he seemed destined for a life of relative comfort; no tremendous victories, no horrible losses. Alas, life often wanders off the projected script, sometimes in brutal ways.

For Madcap, that brutality arrived in the form of tanker truck full of something called Compound. The family, along with several other members of the religious community, loaded into a bus bound for a church picnic and congregation building exercise when the truck veered into them. The resulting crash spread the A.I.M.-created nerve agent through the vehicle killing everyone except Madcap.

Recovering in the hospital, Madcap began to unravel mentally. He found himself unable to reconcile his long-held worldview with the random horror of the largely fatal accident. Unwilling to exist in a place that he now found a mockery of everything he held dear, he attempted suicide and found himself unable to die, only worsening his budding psychosis.

The Philosophy of Villainy

In a world where nothing makes sense anymore, Madcap decided he should add to the random cruel absurdity. Donning a clown costume and wielding a bubble gun, he rampaged through Manhattan spouting nonsense philosophy and victimizing random citizens by fomenting a riot. Only a timely intervention from Steve Rogers, in his Nomad days, stemmed further disaster. 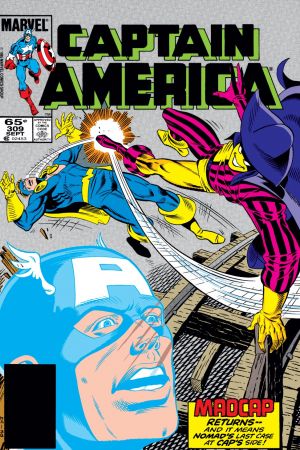 Madcap escaped the mental hospital and got back to costumed antics once more. Courting public access stardom via Dollar Bill’s show, he seemed to make a break for respectability, breaking up a shipment of guns intended for the Rose. However, his self-destructive and absurdist tendencies reared their head again and he let himself be consumed in a warehouse fire rather than accept Daredevil’s help.

Owing to his unique condition, Madcap survived the fire and returned to Dollar Bill’s show. Katie Power and Franklin Richard witnessed his antics and decided he must be fun to hang out with. Madcap readily agreed to a day out with the kids and they quickly learned the need to be more cautious and responsible in the choices they make.

Madcap eventually returned to his favorite activity: sparking riots. This time, however, they exploded in far more violence than before, with people murdering one another in Grand Central Station. Ghost Rider intervened and turns his Penance Stare on the villain, an experience that Madcap surprisingly enjoyed as he experienced sensation, something long-absent from his life.

Deadpool and Madcap encountered one another during a battle between Silver Sable’s Wild Pack and an incarnation of Heroes for Hire and found each other delightful. When they next met, just prior to Secret Invasion, they found themselves drawn together almost immediately, making it easier for Thor to take them both out with one lightning bolt, leaving them a pile of ash. 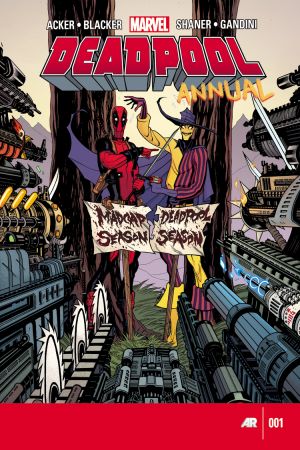 When Deadpool’s healing powers knit him back together, the Merc with a Mouth found himself with another voice in his head. In time, Deadpool realized that the new voice actually came from Madcap, the two somehow becoming joined during the healing process. They convinced Thor and Luke Cage to rip Deadpool’s body in two, allowing one side to regenerate as DP and the other side a “free” Madcap.

It turns out the merger hurt Madcap far more than it initially appeared. Despite seeming like an ally for Deadpool, Madcap masqueraded as the mercenary, terrorizing other of Wilson’s allies and generally spreading chaos wherever he went. Outed, Madcap denied Deadpool the pleasure of beating him, using a degenerator on himself instead.