A darker tone and the rise of antiheroes changed the landscape of comic books during the late 1980s and early 1990s. And no character met the demands of the new trend better than Frank Castle.

In 1987, writer Mike Baron and artist Klaus Janson launched the character’s first ongoing series with THE PUNISHER. Baron wrote the first 63 issues, joined by a host of artists including, most notably, Whilce Portacio and Erik Larsen.

The series proved popular enough that The Punisher earned a spinoff series, called PUNISHER: WAR JOURNAL, in 1988. In its early issues, Frank learned that a mobster named Hector Montoya set up the attack that led to the death of Castle’s family. During his first stay at Ryker’s Island, Frank actually fought alongside Montoya, without knowing that his orders were the ones that changed his life forever. 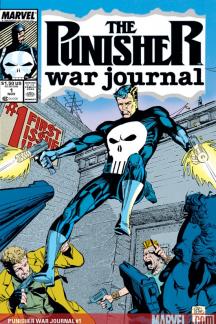 When Montoya got released from prison, The Punisher proved his title to be true, exacting his revenge for the loss of his wife and children. The early WAR JOURNAL issues also included meet-ups with Daredevil, flashbacks to Vietnam, and even a fight-turned-team-up with Wolverine!

Chuck Dixon, John Romita Jr., and Klaus Janson then launched the third Castle-centric book with THE PUNISHER: WAR ZONE in 1992, capturing the look and feel of the era’s action films—plenty of hard-edged heroes mixing it up in gloriously choreographed, explosive violence. 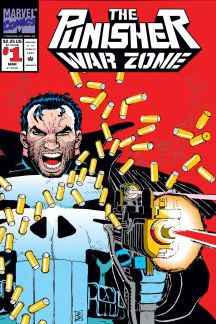 Each of these three series came to their respective ends in 1995, culminating in one story called “Countdown,” running through PUNISHER #103, WAR JOURNAL #79, WAR ZONE #41, PUNISHER #104, and WAR JOURNAL #80. Dixon wrote the crossover, tearing Castle’s world apart and setting him up to be brainwashed in DOUBLE EDGE: ALPHA and DOUBLE EDGE: OMEGA, which led to him murdering Nick Fury!

Not one to stay down for long, Castle returned later that same year in a new volume of PUNISHER, this time written by John Ostrander. In this story, rather than aiming to destroy the mob, Frank actually took charge of one himself! The series also saw The Punisher go head-to-head with Jigsaw, S.H.I.E.L.D., Daredevil, and even the X-Cutioner!

Come back next week to see how Garth Ennis and Steve Dillon relaunched The Punisher!