Wars, whether overt or secret, take their toll on everyone involved. Soldiers fight the battles, their families try to go on living back home and children do their best to understand the whole thing.

SECRET EMPIRE may have ended last week with the true Steve Rogers returning thanks to the efforts of Bucky Barnes, Kobik and everyone else who resisted Hydra’s advances. But, just because Captain America’s back to normal, doesn’t mean the damage gets fixed in an instant, at least in some cases.

This week’s CHAMPIONS #12, by Mark Waid and Humberto Ramos, examined the current status of the team in the wake of their incredible and horrible experiences during the conflict, which we’ll examine now! 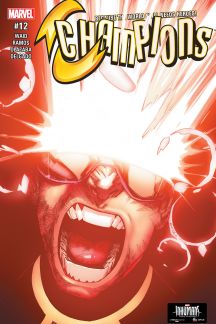 This version of The Champions – Totally Awesome Hulk, Young Cyclops, Ms. Marvel, Viv Vision, Miles Morales Spider-Man and Nova – initially came together because they didn’t like how the adult heroes handled the business of saving the world.

Even though they had their differences, the Champions joined up with the rest of the adult heroes in the Underground after Captain America took over the country in the name of Hydra.

As Secret Empire kicked off, their ranks swelled to include Ironheart as well as the new versions of Wasp, Falcon and Patriot. When Black Widow split off from the rest of the resistance fighters, intent on taking Steve Rogers out for good, the Champions followed her.

Even though Miles Morales had seen the same vision of himself killing Captain America as everyone else in CIVIL WAR II, he and his team intended to let Black Widow train them in the Red Room – as seen in SECRET EMPIRE UPRISING #1 – but never fully agreed with the idea of killing Steve Rogers. 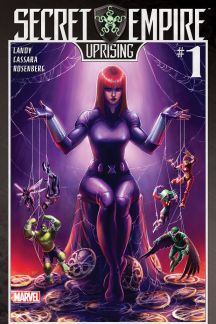 UPRISING also saw the Champions infiltrate the Hydra Youth Choir, a plan designed by Widow to get them close to Viper and eventually flip her to their side. This move allowed both Miles and Black Widow to get close enough to Steve Rogers to kill him, but instead Cap killed his former Avengers comrade and Miles gave himself up.

The remaining members of the team did their best to continue fighting against Hydra-Cap, but were temporarily erased from existence after he used a Cosmic Cube-created armor to rewrite history. As we mentioned above, though, Bucky’s plan to bring Kobik and Steve back worked and everyone returned to the land of the living, though still with the memories of what happened.

In addition to bringing dead characters like Rick Jones and Black Widow back from the dead, Kobik also offered legacy characters like Miles, Amadeus, Sam Wilson, Captain Marvel, Ms. Marvel, Kate Burton, Jane Foster, Wolverine and Iron Heart a “journey of discovery…through the Vanishing Point.” Upon returning in the next panel, these individuals had been restored. To see exactly how, you’ll have to get the various GENERATIONS one-shots that feature these heroes meeting up with their predecessors in ways that allow long-dead or earlier versions of characters to interact with their modern counterparts.