The many faces of Peter Parker's allies and foes. 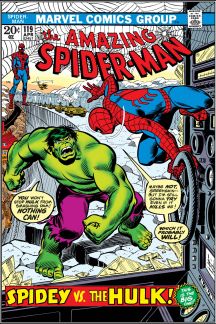 Peter’s friend and roommate Harry Osborn fell deeper into his addiction to drugs in AMAZING SPIDER-MAN #121, a situation made even worse by his father Norman Osborn’s relapse into his criminal role as the Green Goblin. The wallcrawler swung to the rescue when the Goblin kidnapped Gwen Stacy to hurt Peter, and witnessed the worst moment of his life when the young woman died from a fall off the Brooklyn Bridge during the fight. 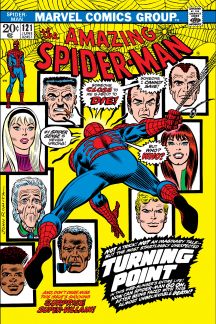 An inconsolable Spider-Man desired nothing less than full revenge on Norman Osborn in AMAZING SPIDER-MAN #122, and their subsequent ultimate showdown ended in the Goblin’s death from being impaled on his own glider. Later, Mary Jane Watson comforted Peter over his loss of Gwen. J. Jonah Jameson hired Luke Cage to hunt down and capture Spidey in AMAZING SPIDER-MAN #123, but the young hero convinced Cage to doubt Jameson’s dubious high-moral reasons for doing so.

The Kangaroo bounced back into the webslinger’s troubled life in AMAZING SPIDER-MAN #126, and a new super villain named the Basilisk created chaos for Peter and Captain Marvel in MARVEL TEAM-UP #16. When Mary Jane became the target of the Vulture for witnessing a crime in AMAZING SPIDER-MAN #127, the bird-brained baddie swooped in to snag Spidey and drop him from a very, very high height…