We're pretty stoked for this weekend's release of the animated film "Spider-Man: Into the Spider-Verse," and we know you all are as well!

Voiced by Shameik Moore, the "Into the Spider-Verse" version of Miles Morales comes to encounter several other incarnations of Spider-Man in the multiverse, including Peter Parker, Gwen Stacy, Peni Parker, Spider-Ham, and Spider-Man Noir. With Miles' big screen debut starting tomorrow, some of your favorite hit mobile games, "Marvel Future Fight," "Marvel Puzzle Quest," and "Marvel Strike Force," are swinging into action!

Heading into Marvel Strike Force this week is the youngest member on the team, Spider-Man (Miles Morales). Miles will be bringing his Spidey-Sense and electric Venom blasts into the fray. 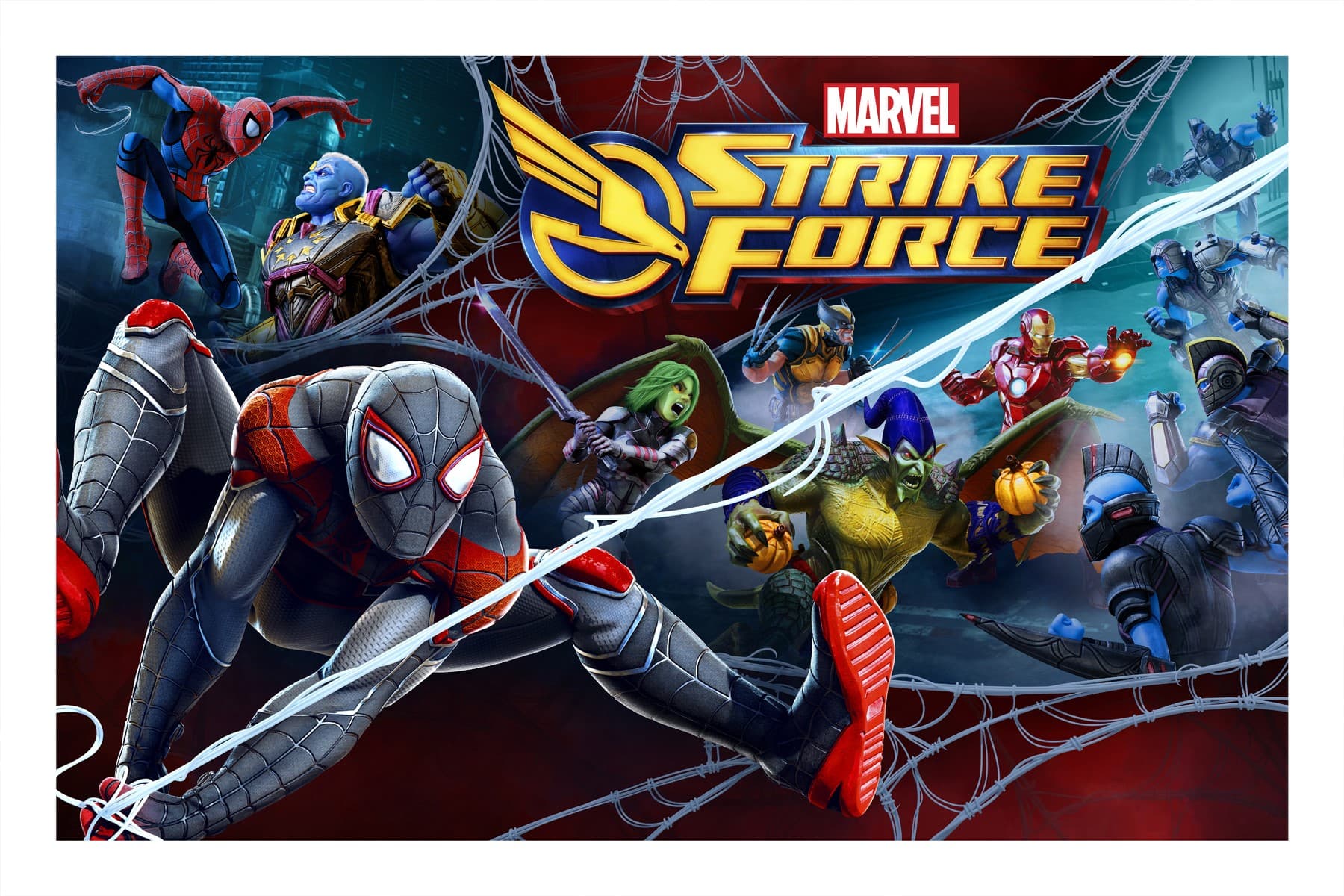 What's a super hero without a super baddy? The maniacal Green Goblin will be bringing his superhuman strength, reflexes and endurance into the game on December 21. Players will need to watch out for his variety of bizarre devices as they battle against the amoral industrialist. 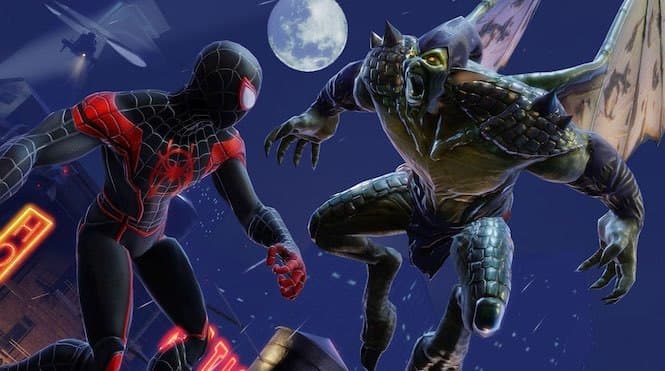 Assemble your top Tech team for the new Spider-Man Event Campaign and Raid!

Are your Spidey-Senses tingling? Make sure to check in daily between 12/8 and 12/17 for fantastic Web-Slinger related rewards! 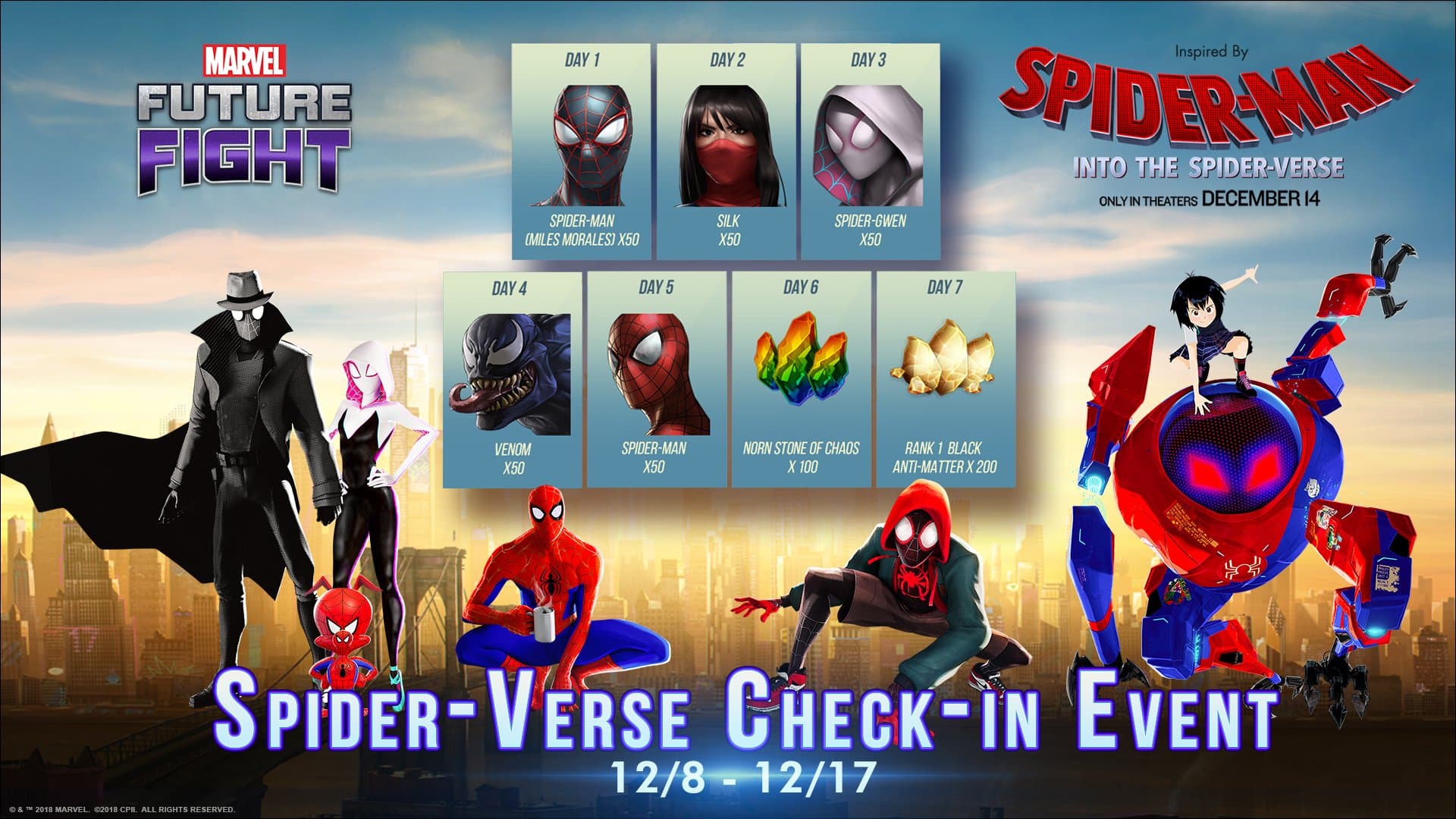 It's a week of Spidey in Marvel Puzzle Quest! Log in today for a free token in the Spider-Verse Vault!

Make way for Kingpin (Spider-Verse)! The new 5-Star Kingpin arrives this week ready to crush his opponents. Pick him up in the hit mobile game available now here! 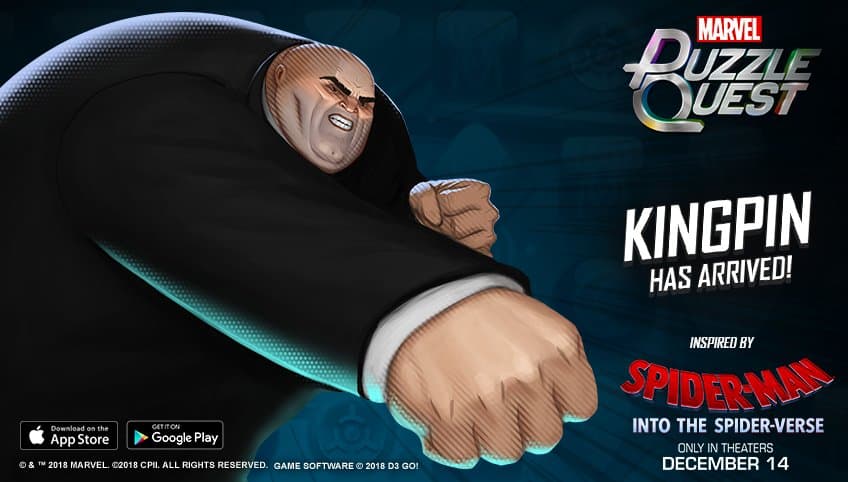 Wilson Fisk is New York City's king of crime, known for his incredible strength and brilliant tactical mind. With an army of Maggia at his command, Kingpin is no idle threat. His influence as a crime boss is boundless--his power, massive. Can Spider-Man defeat this goliath?

Kingpin puts a stranglehold on his opponents by destroying their AP and punishing them for for not having AP. Pair Kingpin with other characters that reduce the enemy AP pools.

Kingpin makes the enemy an offer they can't refuse with his Forced Hand. Choose a friendly Strike, Attack, or Protect tile to give to the enemy team. In return, take up to 5 AP in your strongest color from the enemy. If the enemy has less than 5 AP in that color, take all of it and deal 13868 damage. 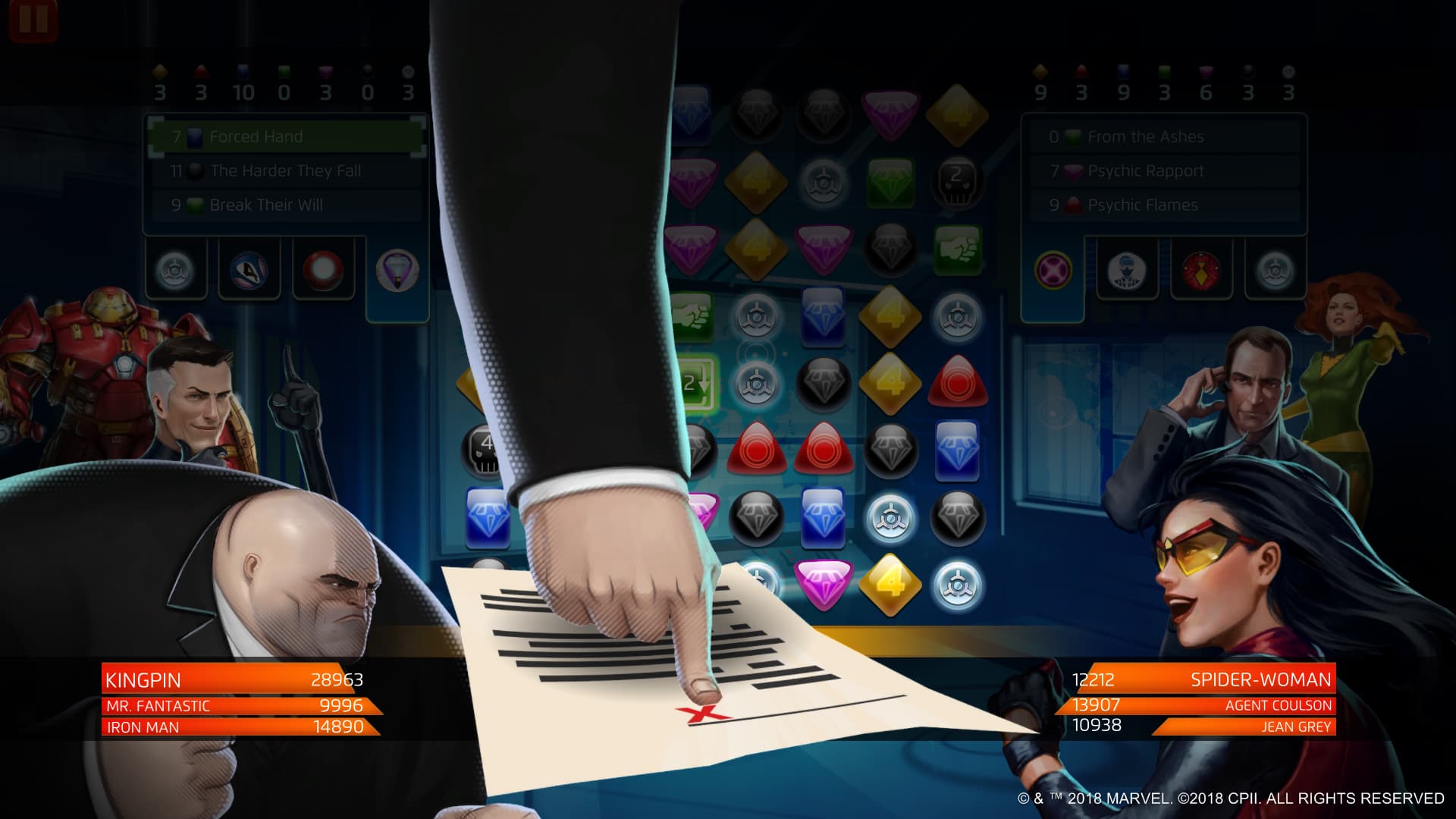 Kingpin undercuts an upstart opponent. Destroys up to 8 AP of the opponent's largest AP pool and creates a Fortified 6-turn Countdown tile. While on the board, this tile reduces all enemy match damage by 50% plus an additional 5% for each AP destroyed by this power. This power cannot be fired while a friendly The Harder They Fall tile is already on the board. 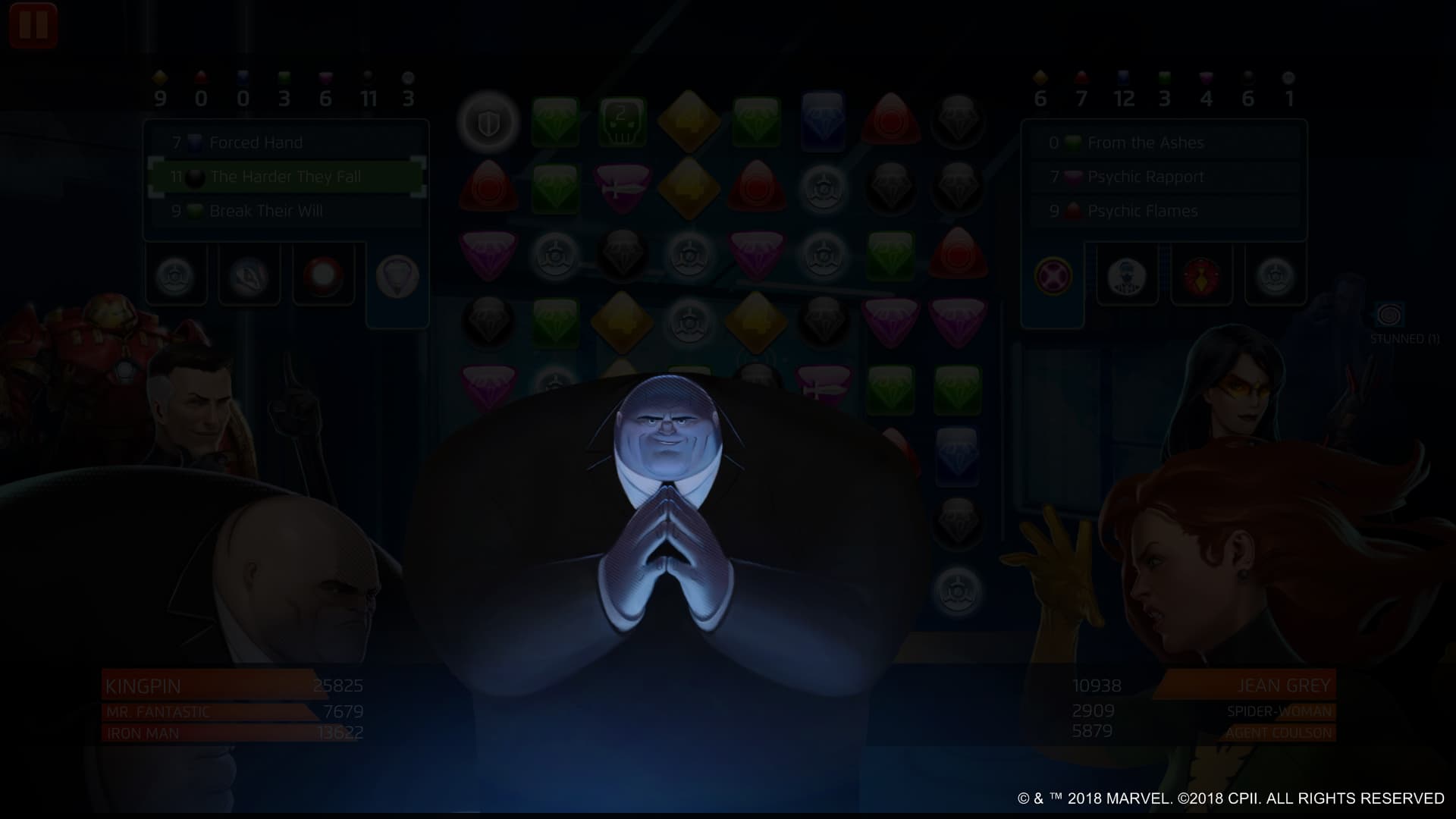 Kingpin loses his composure and launches into a relentless wave of pummels with Break Their Will. Creates a Fortified 2-turn Repeater tile that deals 8316 damage. If you have more AP than the enemy in your strongest color, this power also creates 3 strength 127 Attack tiles. 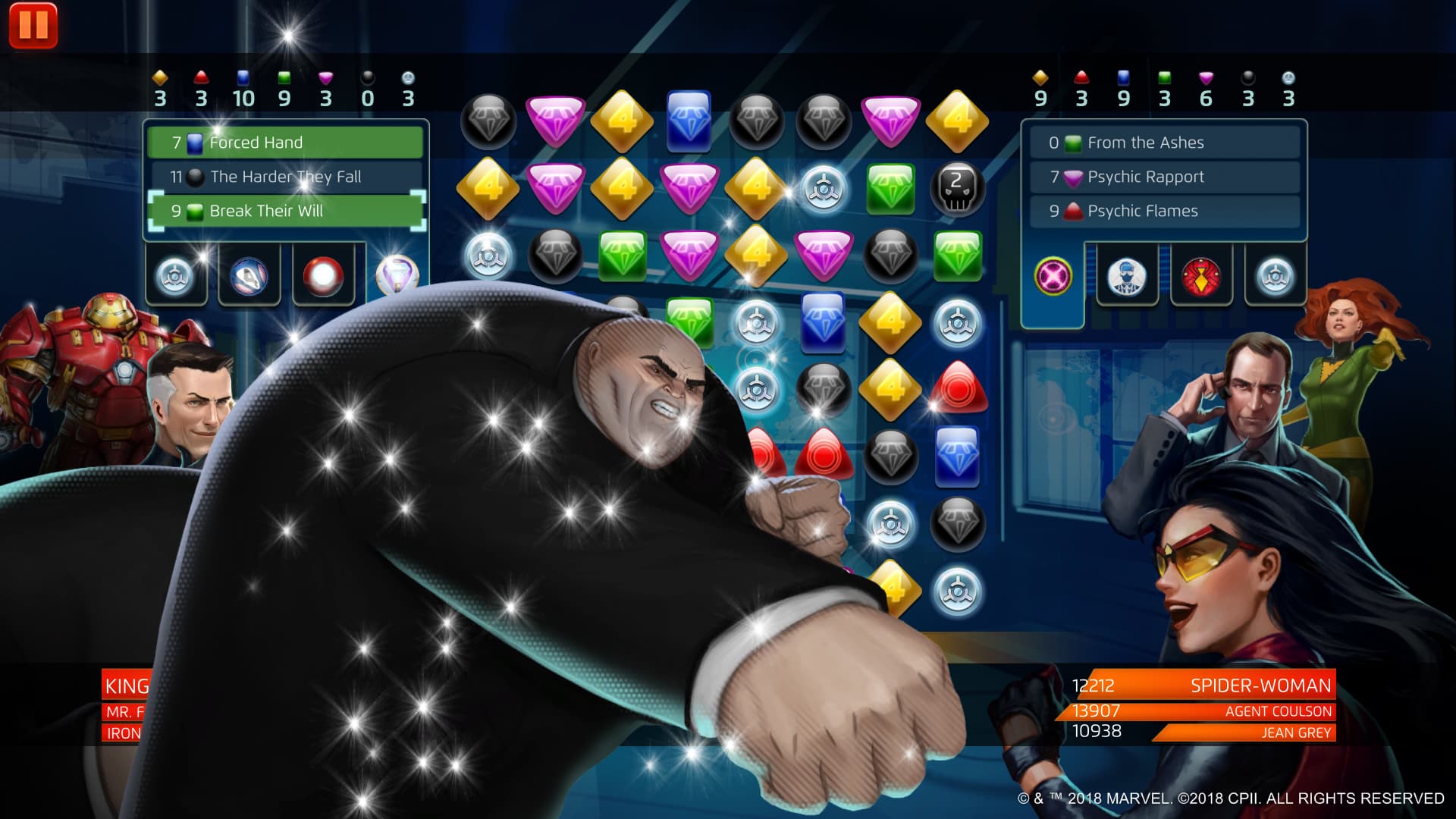 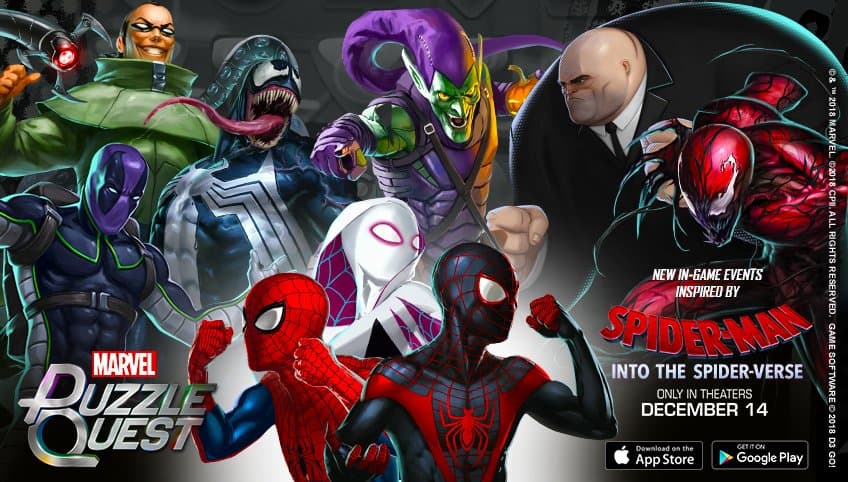 With the Sinister 600 event, we can tease that Spider-Ham will be making his way into the game soon!

Mark the launch of Marvel Studios' 'WandaVision' with a look at this week's top hits!

The Champions Go Undercover to Change the World

Danny Lore and Luciano Vecchio take the reins for a daring new era of 'Champions'!

Miles Morales: Trapped in a Clone Saga of His Own

A new spin on the classic Spider-Man storyline kicks off in 'Miles Morales: Spider-Man #25'!