“I’m sorry, Senator Braxis,” a familiar out-of-frame character states at the beginning of STAR WARS: DARK TIMES #1. “The Imperial throne cannot interfere in local politics.” In one single opening panel, the tone is set for the 17-issue series to follow, as the Emperor refuses to assist a planet in need. On the same page, Palpatine’s associates inform him that anti-Imperial sentiments have been rounded up and eliminated, and that other planets in turmoil are being put in their place. It’s clear that optimism has no place in this new era for the Star Wars galaxy. 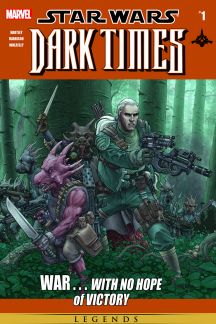 Beginning shortly after the end of “Revenge of the Sith,” the very title of STAR WARS: DARK TIMES should immediately resonate with Star Wars fans, per an Obi-Wan Kenobi quote about the glory days of the Jedi Knights from “A New Hope”: “Before the dark times. Before the Empire.” Picking up after STAR WARS: PURGE, DARK TIMES serves as a direct continuation of STAR WARS: REPUBLIC, offering numerous story arcs with new and established characters as they adapt to the new galactic order.

Most of issue #1 focuses on a battle of natives versus Imperial forces on New Plympto. Not only do we see the hopeless struggle of the Triceratops-like Nosaurians, we also get a inside the heads of the clone troopers: “When the fighting ends, what then for men bred only to be soldiers?” we’re asked. “What future is there for men of action when peace breaks out?” Anyone familiar with what becomes of the clones comes to realize the phrase “dark times” extends to more than just the good guys…