Go undercover with Natasha Romanoff⁠—from her 1960s debut through today!

More than any other character in the Marvel Universe, Black Widow knows how to move around without drawing a lot of attention. As a Russian-trained spy and assassin who ultimately defected and allied herself with the Avengers, Natasha Romanoff has a unique set of skills that make her a hero unlike any other.

While she's been the star of her own books and joined teams like Earth's Mightiest Heroes, the Secret Avengers, and the Champions, Black Widow has been on dozens of other masterful missions that might not spring to mind as quickly...

This list runs down ten stories you may not have laid eyes on before, but should definitely read on Marvel Unlimited right now!

By 1970, Black Widow was looking for a change—and got one by way of Stan Lee and John Romita in AMAZING SPIDER-MAN (1963) #86. Until then, she'd mainly been working as a KGB agent, but wanted to make a new life for herself by helping people and thought she could learn a thing or two from the Wall-Crawler. The meeting may not have gone exactly as planned, but this issue did set the tone for Natasha’s stories moving forward.

Between her first stint with the Avengers and her eventual partnership with Daredevil, Natasha starred in the split book AMAZING ADVENTURES for the first eight issues. Crafted by a pantheon of Marvel masters like Gary Friedrich, John Buscema, Gene Colan, Roy Thomas, Don Heck, Sal Buscema, Gerry Conway, and Bill Everett, these stories featured the Widow getting tangled up with militants, mobsters, and malicious villains, plus took a deeper look at her complicated history! 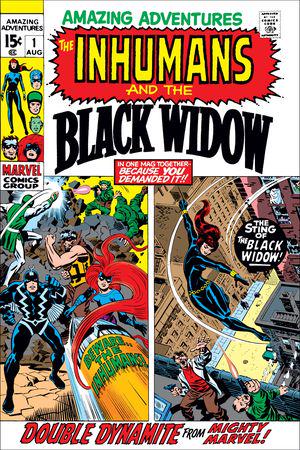 The two most famous spider-themed heroes joined forces on several occasions in the pages of MARVEL TEAM-UP. And in 1979's issues #82-85 by Chris Claremont and Sal Buscema, Spidey met a red-haired school teacher by the name of Nancy Rushman who he mistook for his fellow hero! Of course, the Black Widow costume in her bag didn’t help! Nor did all the impending trouble with S.H.I.E.L.D., Silver Samurai, Boomerang, and Viper. However, thanks to some help from the Web-Head, Nick Fury, and Shang-Chi, Rushman discovered the truth about herself and Black Widow came back fully restored.

Throughout the '70s and into the '80s, Marvel told more mature stories in a series of black and white magazines like BIZARRE ADVENTURES. In the 25th issue of that mag, Ralph Macchio and Paul Gulacy realized that a hard-living super-spy would make for an excellent story subject! The tone of this one might seem standard for Black Widow stories today, but it was a bold new direction to combine the explosive world of spy fiction with the characters populating the House of Ideas. 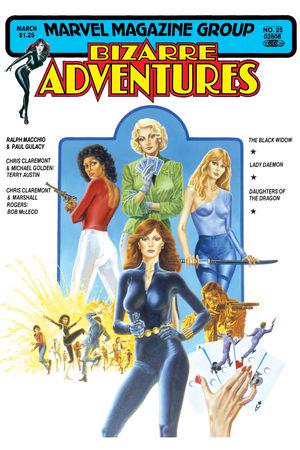 For years, Black Widow's loyalties were questioned both by readers and those within S.H.I.E.L.D., though Nick Fury always seemed to know where she’d fall. In 1983’s MARVEL FANFARE #10-13 by Ralph Macchio and George Perez, she proved that she could take on her birth country—and even some very important people from her past—if it meant keeping the world safe. This series featured all the super espionage you could ever want in the Mighty Marvel Manner!

Over the years, details have continued to be added to Natasha Romanoff’s deep history. And in 1990, Chris Claremont and Jim Lee revealed that she had actually once met Captain America and the man known as Logan! While that story played out in the past, Black Widow teamed up with the X-Men in the present to take on the Hand! 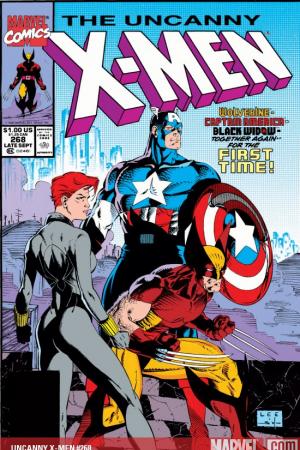 Natasha Romanoff and Frank Castle came together to stop a weapon of mass destruction in the 1992 PUNISHER/BLACK WIDOW: SPINNING DOOMSDAY'S WEB graphic novel by D.G. Chichester and Larry Stroman. Though they started out with a fight, the pair of soldiers from very different backgrounds teamed-up and saved the day, working with someone like the Punisher, though, gave the Widow gave her definite cause for reflection...

Like any good spider, Black Widow has no problem making her way through tangled webs. In 1998’s JOURNEY INTO MYSTERY #517-519 by Scott Lobdell and Randy Green, readers learned why Natasha once went undercover in the small town of Portland, Maine. The answers revolved around a group of homegrown terrorists enraged at the government who all met on the internet, but you’ll have to read the issues to see how it all came together! 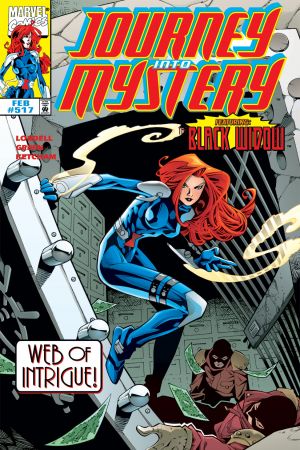 Shortly after Tony Stark and company returned to active duty after being shunted into the Heroes Reborn Universe, Natasha called him for help as seen in IRON MAN (1998) #5-6. Kurt Busiek and company developed a story wherein Tony agreed to help his old friend find out who’d been kidnapping scientists...by becoming bait! Then the Widow reappeared in mags #8-11 to help save Stark’s life after a brutal attack! These appearances also featured Romanoff dealing with the fact that the Avengers fell to Onslaught while under her leadership.

Natasha may have started her life as a child manipulated by the Red Room to become a cold-hearted spy, but she’s grown into a valued member of the Avengers who would sacrifice just about anything to keep her friends safe... In this issue, while on a mission with Steve Rogers, Sharon Carter, and War Machine, things went sideways and she found herself back in time trying to figure out a subtle way to save her friends. Given that all those characters are still walking, you know she succeeded, but the exact way in which she went about it must be seen to be believed!