Recap the whirlwind lives of Reed and Sue's kids!

Surely, being the children of Mister Fantastic and the Invisible Woman has to be dangerous, right? Oh, no doubt.

But can being their kids also be a heck of a good time? Absolutely!

Besides, Franklin and Valeria Richards cannot be thought of as just your average tweens. They have the Human Torch and the Thing as their uncles. They've hung out with Spider-Man. They've gone to classes with Dragon Man and several Mole People. Their lives have been anything but average and, at nearly every turn, they've risen to the occasion.

Before that, however, celebrate the Fantastic Four: World's Greatest Week with ten moments that have defined Franklin and Valeria's journeys so far...

Franklin arrived first and immediately proved a challenge to his parents.

Given his uniquely radiation altered DNA, he manifested his mutant powers far earlier than had been seen previously. As a result, he quickly became a danger to himself and others. Short-term, Reed literally shut his child’s mind down until an incident with Ultron released Franklin’s excessive energy. Returned to levels of power he could handle, even at his young age, the Richards enlisted Agatha Harkness as their nanny. Agatha and Franklin grew close and she proved an excellent support during his youngest years.

Reed, evidently still not ready to have a super powered child, created inhibitors to give his son a normal life. Franklin, however, had little interest in that. Instead, the child quickly found a way around the mechanical limitations, got himself a codename—Tattletale—and joined the most famous collection of kids heroes in the Marvel Universe: the Power Pack.

The Richards would eventually connect and become friends with the Powers while both parties remained unaware of Franklin’s activities. Heck, Franklin even lived at the Power Pack headquarters for a time until the Richards decided that, perhaps, if Franklin had to live at a Super Hero headquarters, maybe it made more sense if he lived in the one named for his family.

They Grow Up So Fast

Nathaniel Richards abducted Franklin soon thereafter, but so thoughtfully left behind Psi-Lord, a teenage alternate reality Franklin raised in a realm outside of reality by Nathaniel himself. Sometimes grandparents make bad choices too.

Eventually, the Super Villain Hyperstorm would erase the abduction—and thus Psi-Lord—from existence by showing up at the exact right time to return a stop Nathaniel’s plan. Ironically, this may have also erased Hyperstorm. See...Hyperstorm had been the result of the union between Rachel Summers and an older Psi-Lord. No Psi-Lord; no Summers-Richards romance. No Summer-Richards romance; no baby. No baby; no Hyperstorm.

Franklin has always been more powerful than most seem to realize. Whether it meant pretending his dad’s inhibitors worked when they did not or hiding how he honed his skills while under Harkness’s tutelage, Franklin seemed to be all about keeping it low key.

The starkest example of this turned out to be the time he created an entire pocket universe for his family and many of the Avengers to live in after the events of Onslaught so he could save their lives. For over a year, they disappeared from the Marvel Universe and lived an entirely different life in a different dimension until Franklin brought them back to the main Marvel Universe.

Speaking of being covertly powerful, Franklin did something else wild that no one knew about for years. At one point, Sue, had been pregnant with a second child. Unfortunately, complications arose and while Reed, with an assist from Doctor Doom, proved able to save his wife, their child died before birth.

Franklin, however, used his abilities to pluck the fetus out of timeline, transfer her across dimensions to an alternate universe Sue, one who ended up with a heroic Doctor Doom, where the fetus ended up successfully brought to term. This child we know now as his younger sister Valeria Richards.

Before that could happen, however, the FF had to discover this alternate timeline, adopt Valeria, see her regress to a nearly full-term fetus in Sue’s womb due after Valeria aided her brother in saving the universe, and being born naturally to the mother she had originally been conceived by years earlier, with a timely intervention from our universe’s Doctor Doom.

You gotta admit, Reed and Sue do keep this whole "having kids" thing interesting.

A Field Trip to Hell

It turns out Doom has to got to be Doom and he did not just help Valeria be born out of the goodness of his heart. He also placed a magic spell on her that would, in essence, make her his child at some point in the future. That time came and Valeria’s first word ended up being Doom... Adorable, but scary.

However, the fallout did not stop there. As Doom held her under his thrall, her brother ended up in literal Hell and the FF swapped powers, trapping them all in agony. Love triumphs over Doom, however, as the First Family (plus a timely intervention from Doctor Strange) saved the day.

A Genius and Then Some

After a future version of Sue attempted to abduct Valeria, Reed discovered something watching the surveillance footage. Sue then paid a visit to her daughter’s nightstand and confirmed Reed’s suspicions: their little girl had been maturing intellectually very rapidly. Already reading books that her father might enjoy, she had also taken to inventing things on the sly that rival his own creations.

It turns out, the apple does not fall far from the tree when it comes to the Richards children. 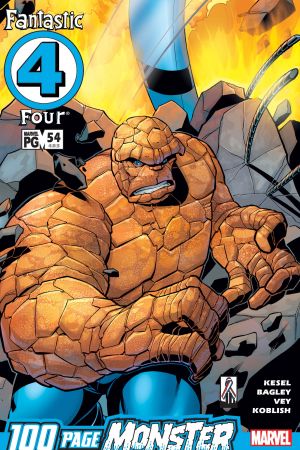 As the head of H.A.M.M.E.R., Norman Osborn once decided to take on all comers and eliminate anyone who might oppose him. As part of the plan, he invaded the Fantastic Four’s home only to find Valeria and Franklin by themselves. Using her genius-level wits, Valeria separated Osborn from his numerous H.A.M.M.E.R. agents, luring him into a conference room where Franklin awaited him, wearing a Spider-Man mask. The site of the mask enraged Osborn, who chased after the children, his plan entirely abandoned.

The FF arrived just as Osborn cornered the siblings. However, it turned out the kids could have done it on their own as Franklin ended the conflict by shooting Osborn in the shoulder. However, after H.A.M.M.E.R. departed, the gun in question appeared to only be a toy.

Journey to the End of the Universe

While everyone seemed focused on Valeria’s genius level and rising intelligence, her brother has been receiving training in his powers in secret. His tutor turned out to be himself, and this led to an interdimensional time hopping journey. Along the way, we met grown up Valeria as well. The siblings took on and defeated Celestials with her intellect and his mutant powers. Franklin also learned from Galactus that someday millions of years from now, the two would watch the universe’s rebirth, meaning that Franklin becomes functionally immortal in adulthood...

Standing together with their parents and the Future Foundation at some undisclosed future date, ther prepare to confront the Griever at the End of All Things, and take on new codenames—with Franklin christening himself Powerhouse and Valeria adopting the name Brainstorm.

Now, we all thought they’d end up being Powerhouse and Brainstorm during their family’s last stand. However, given recent events in FANTASTIC FOUR, it seems the two took those names much earlier... Of course, Valeria and Franklin never really did care for being predictable, did they?

Stay tuned for more from Fantastic Four: World's Greatest Week on Marvel.com! Then prepare to read FANTASTIC FOUR #6 next week!