5 of the Best Future Storylines in Marvel Comics

Prepare for tomorrow's 'Old Man Quill' #2 by examining a few masterful future stories from the House of Ideas!

Marvel Comics is heading back into the dystopian future of OLD MAN LOGAN and OLD MAN HAWKEYE, this time with a more cosmic flare...

OLD MAN QUILL is a 12-issue series starring a future version of our favorite spaceship captain, Star-Lord. Many years after an attack on Spartax killed his family, Quill is reunited with the Guardians of the Galaxy and heads out on one final mission back to Earth.

OLD MAN QUILL isn’t the first time Marvel has taken us into a curious potential future. Let’s look at five other stories and see what our heroes may (or hopefully may not) become.

Set in the far future, Peter Parker is an old man. Super Heroes are nonexistent and New York City is at “peace” thanks to the militarized police called Reign. When the Mayor of New York announces a new security system called WEBB that will be used to protect the entire city, J. Jonah Jameson attempts to convince Peter to come out of retirement, as he believes something is not right. WEBB is a plot by the Mayor’s aide, Edward Sacks (secretly Venom) to turn the entire populace into a symbiote army. Thanks to a push from a long-dead Doctor Octopus, Peter reemerges as the wallcrawler. 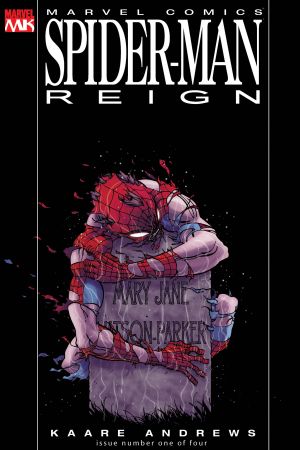 What makes this story stand out is the build-up to Spider-Man’s return. Throughout the tale we see hints of the wall-crawler, but it’s not until the climax of the book that we get to look at Spider-Man in all his glory.

Billions of years ago, the Celestials chose Earth as an incubator or “egg” for the eventual birth of another Celestial. They also modified humanity so certain beings would be granted super powers to protect the egg inadvertently. The Marvel Universe began here. After the Inhuman Blackbolt released a Terrigen bomb across the planet allowing everyone on Earth super powers, it became apparent that humanity would destroy Earth before the Celestial could be born.

EARTH X is a complicated story set in the future where war is occurring on many fronts. Humanity is fighting itself over control of Earth. The Celestials will be arriving to wipe out humanity so the Celestial can be born. Machine Man, the new Watcher, is doing his best to save everyone from everything. It shows our favorite heroes at their lowest points, yet allows them rise above and be the mighty Marvel heroes they’re still meant to be.

DAYS OF FUTURE PAST

In 2013 (thankfully, looks like we dodged a bullet in the real world), mutants are always on the run from Sentinels who either place them in internment camps or execute them. An older Kitty Pryde is sent back through time into the body of her past self in 1980 to prevent the catalyst of this dystopian future. This future Kitty and X-Men are successful in stopping the assassination of Senator Robert Kelly by the Brotherhood of Evil Mutants.

While this was one of the first “time travel/alternate future” adventures for our merry mutants, it certainly wouldn’t be the last. It’s come to the point where you don’t really get to graduate from Xavier’s school until you encounter an alternate version of yourself during your tenure!

You know, not every future scenario of the Marvel Universe has to turn into the next Mad Max. In SPIDER-GIRL, May “Mayday” Parker is the daughter of Peter and Mary Jane Parker. She has inherited her father’s powers and has taken up the new mantle. Her costume was an upgraded version of her Uncle Ben’s old uniform (that's Ben Reilly, the Scarlet Spider). Then, following the events of SPIDER-VERSE, May dons her father’s original costume and becomes Spider-Woman. 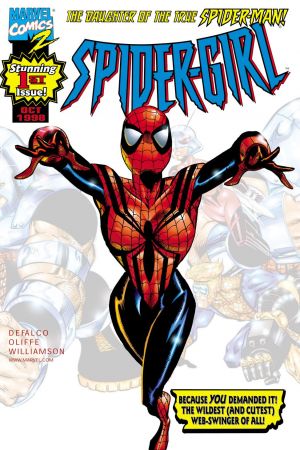 While this world continues to be full of the “Parker Luck” fans have come to know and love (sort of), it's also a world of hope. Whereas other futures show heroes and times at their lowest point, this tale gives us a glimpse into a future where our heroes never give up, continue to fight the good fight, and are able to pass that hope to a new generation.

Arguably one of the greatest of the “future” stories is that of Wolverine. In the OLD MAN LOGAN story arc of WOLVERINE, the United States has been divided among the world’s villains, years after many of them teamed together to take the heroes down once and for all. Living peacefully with his family in “Hulkland,” Logan goes on a delivery run with a now blind Hawkeye to help pay his taxes to the Hulk Gang, the offspring of Bruce Banner and Jennifer Walters.

After a cross-country adventure that results in the death of the Red Skull, Logan returns home only to find his family killed, as the Hulk Gang were tired of waiting for their payment. A quest for vengeance leads to a showdown with the Hulk himself, and a new outlook and mission for the man who is the best there is at what he does.