Look back at the 1968 debut of the Sons of Satannish!

With DOCTOR STRANGE #400 on the way next month, we've decided to look back at a few memorable milestones from the Sorcerer Supreme's history. Today: the Sons of Satannish! Fifty years ago today, Roy Thomas and Gene Colan's DOCTOR STRANGE #175 introduced the world to the subterranean demon-worshipping cult of wizards.

They’re a nasty bunch who prostrate themselves before (you guessed it!) Satannish—who was introduced in issue #174—a Lovecraftian entity of pure evil and darkness that grants them twisted, magical powers. Residing below the bustling streets of New York City, the cult attempts to take down Sorcerer Supreme because they are sworn enemies of the Ancient One. Strange is now dating the sorceress Clea after she decided to hide from Dormammu in Earth’s dimension. Even so, she finds her safe haven a bore, unable to fly or exercise her full abilities that are mysteriously beginning to fade...

Lost in his own thoughts about the Sons of Satannish, Strange is shocked to see Clea take flight and fears that mere mortals will brand her as a witch and harm her. Nevertheless, a group of people do see her flying, prompting Strange to wipe their memories clean. In the cab of the way home, Stephen senses an overwhelming sense of menace, which he tries to disregard.

Little does he know that his suspicious are absolutely correct. The Sons are preparing for an all-out assault, praying to Satannish, who resides in “realms where planets bow before one fearful entity.” The demon hears their supplication and arrives in an explosion of fiery awesomeness, asking them why he was summoned. The Sons beg for more dark power, which Satannish decides to grant them, which they use to cast a spell on Strange and Clea’s taxi. 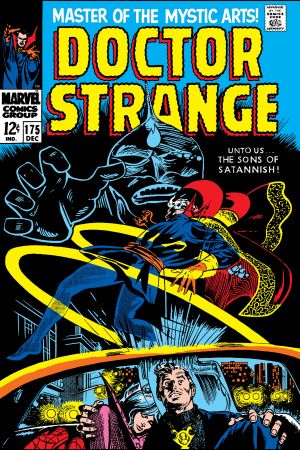 Strange sends his astral self to see what’s going on and realizes that the cab is surrounded by “rings of some negativistic nihilistic force” that threaten to crush his spiritual form. Using his full abilities, he begins to break the rings, which shatters the Sons’ “Satan-Sphere,” a crystal ball-like weapon used for watching the world and viciously attacking it.

After dropping Clea at home, Stephen recalls his encounter with Satannish only days before. During that meeting, the demon let slip that there were those on Earth who had pledged their souls to him for all eternity. Strange, fearing an oncoming war, does not realize that his cloak is appearing on his shoulders, much to the confusion of the people around him.

Back at the Sanctum Sanctorum, the good Doctor uses the Sacred Book of Vishanti to find the answers he seeks. He learns what we already know, through the eons, Satannish has bestowed powers on those humans that pledge their eternal souls to him. He worries for Clea’s safety and flies out into the night to rescue her from the Sons, who trick her by taking the form of Strange’s accomplice, Wong. Clea and fake Wong are then surrounded by a group of thugs on whom Clea uses a spell of temporal vanishment.

This weakens Clea greatly, making her susceptible to the Son of Satannish, who finally reveals himself. Going on about his contempt for mortals and their fear of the unknown, the villain plainly states that he is a friend, not a foe. With Clea frustrated over the fact of keeping her powers hidden, we are meant to wonder if she will be susceptible to the charms of pledging her allegiance to Satannish...

Read this story on Marvel Unlimited now! Then pick up the 400th issue of DOCTOR STRANGE next month!