A New Beginning for Carnage

Prepare for Web of Venom: Carnage Born #1 with a look back at the first appearance of Cletus Kasady!

Every week, we use the powers of Marvel Unlimited to celebrate a major character's first appearance in the mighty Marvel Universe.

This week, one of the most dangerous and deadly Super Villains in Marvel history returns in Donny Cates and Danilo Beyruth's WEB OF VENOM: CARNAGE BORN #1!

Carnage, AKA Cletus Kasady, made his debut in AMAZING SPIDER-MAN #344 by David Michelinie and Erik Larsen. Unlike many of the Wallcrawler's villains, this individual didn't focus on robbing banks or world domination, but instead bloody, senseless murder.

Kasady, a serial killer, happened to be locked up in Ryker's right alongside one-time Venom host Eddie Brock. Just as Cletus decided to kill his cellmate, the symbiote showed up to bust Brock out. However, a few symbiote drops remained behind and made their way into the inmate through a cut on his hand. Upon making contact with the killer, a new, insanely dangerous villain came into being: Carnage. 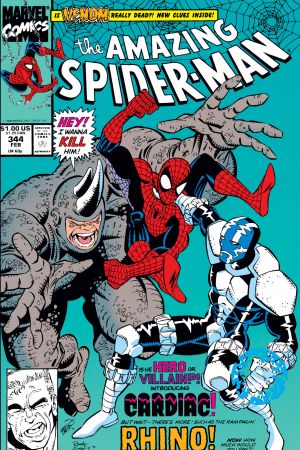 After breaking out of jail in AMAZING SPIDER-MAN #359, Carnage made a cameo in the following issue where he showed his lunacy by killing a man just because he thought the name Gunny Stein was "stupid." The madman made his full debut in issue #361 by killing a man named Chip simply for being in the wrong place at the right time.

When Kasady popped up on Peter Parker's radar, the hero did some digging into the killer's past. Young Cletus, an orphan from Brooklyn, grew up at the St. Estes Home For Boys where, years later, a fire lead to the death of the administrator in charge of discipline. Peter later guessed that Kasady may have used the fire to cover up his first murder. 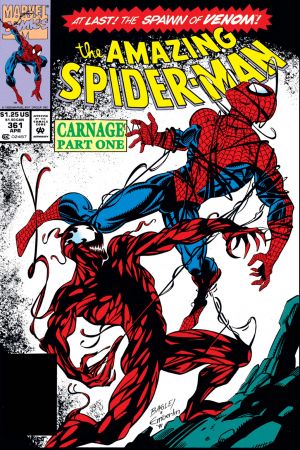 More research lead to even more theories of unproven, but assumed misdeeds on Cletus' part. Eventually, Spidey tracked him down leading to his first battle with Carnage, expertly rendered by Mark Bagley. Our hero barely made it out of the fight alive.

Later, while talking to Mary Jane about his options for stopping the villain, Peter came to the grim conclusion that he'd have to let Venom loose in hopes that they would draw each other out. The story stemming from that decision ran through issue #363.

While Spider-Man got some help from Johnny Storm to track Eddie Brock and Venom down to a beach in the Caribbean, Carnage continued slicing and dicing his way through the unsuspecting denizens of New York City. Recognizing the threat Kasady posed, Venom agreed to team up with the Wallcrawler, they both realized how right they were when Carnage tossed a baby out a window to distract them so he could escape! 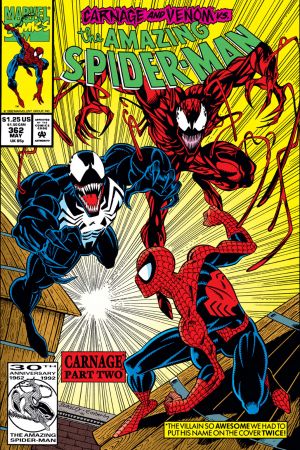 The unlikely pair caught up to their quarry at a local arena where the killer attacked a heavy metal concert. After a knock-down, drag-out fight that took all three down into the train tracks below, they returned to the stage where Spider-Man used the feedback of the amps to knock out both symbiotes. With some help from Mr. Fantastic and the Human Torch, Spidey put them both down so they could be locked up.

Carnage continues to make trouble for just about anyone he crosses paths with, so it's a real wonder why a particular cult wants to bring him back, as seen in the pages of this week's WEB OF VENOM: CARNAGE BORN #1. You'll just have to read the book to find out.

It didn't take long for Carnage to prove nearly as popular as his symbiotic sibling-parent. He made a terrible return in the MAXIMUM CARNAGE crossover which ran for 14 issues through five different titles. The madman gathered a group of like-minded maniacs to go on a killing spree after he broke out of jail. Spider-Man and Venom re-teamed, this time with back-ups like Captain America, Iron Fist, Cloak, Dagger, and others.