Look back at a classic Avengers saga!

AVENGERS: NO ROAD HOME isn’t the first time a disparate group of Avengers were brought together to face a cataclysmic threat. One of our favorite tales from the group’s past is AVENGERS FOREVER, a 12-issue tale that was written by Kurt Busiek and Roger Stern, and illustrated by Carlos Pacheco and Jesus Merino.

In fact, the 20th anniversary of AVENGERS FOREVER recently passed at the end of 2018. And there are a few parallels between AVENGERS FOREVER and NO ROAD HOME that are worth exploring. It’s also a story that should be required reading for anyone who loves Earth’s Mightiest Heroes.

AVENGERS FOREVER dovetailed nicely into Busiek’s stint on the AVENGERS ongoing series. He plucked out Giant Man (Hank Pym) and the Wasp (Janet van Dyne) from the present, and surrounded them with a team of familiar faces that were almost strangers to them. Their comrades included Captain America at his lowest point, following the exposure of the Secret Empire’s leader; Hawkeye immediately after the Kree-Skrull War; Captain Marvel (Genis-Vell) from a few months in the future; and Songbird, the ex-villain who redeemed herself as a member of the Thunderbolts.

One of the common threads between AVENGERS FOREVER and NO ROAD HOME is that they've both added characters who had never been on the team before. In the former, it was Songbird, and the latter has Rocket. Hawkeye is the only member on both teams. It’s also noteworthy that Iron Man and Thor were snubbed both times. Perhaps it’s because their presence would unbalance the team. 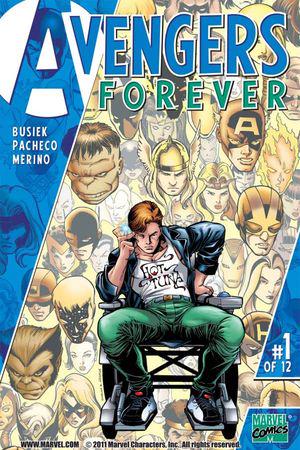 There was also a seventh member of the AVENGERS FOREVER team: Hank Pym. Or more specifically, Yellowjacket; back when he didn’t realize that he was Hank Pym. Yellowjacket introduced conflict to the group, especially with Giant Man and Hawkeye. He was also the traitor, and we can’t help but wonder if NO ROAD HOME will include a turncoat of its own.

Within the story itself, the Avengers’ long time ally, Rick Jones, was targeted for death by Immortus. The Kree Supreme Intelligence and Kang the Conqueror came to Rick’s defense, and former Zodiac member Libra helped Rick use his latent powers to summon seven Avengers from across time and space.

Intriguingly, AVENGERS FOREVER is just as much Kang’s story as it is the Avengers’. Their long time enemy was desperate to escape his destiny; which would inevitably transform him into Immortus. It gave Kang more dimensions than he previously had, and it even made him seem heroic when compared to his counterpart. Busiek and Stern’s affection for Kang was very apparent, and he even received a spotlight issue in AVENGERS FOREVER #9. This story also set up Kang to play a large role in Busiek’s final story on the AVENGERS ongoing series. 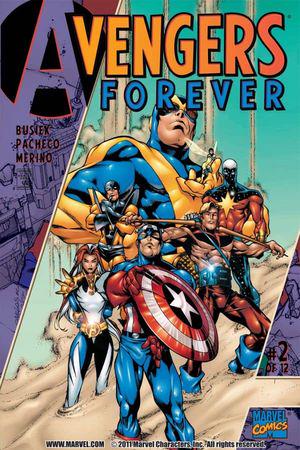 Pacheco and Merino deserve a special shout out for the absolutely breathtaking artwork in this tale. One of the reasons AVENGERS FOREVER holds up so well is that Pacheco and Merino were at the top of their game with stunning depictions of the Avengers’ journey through time and space. Each side trip was memorable, as the story revisited the Avengers of the ‘50s from WHAT IF? and even visited a few of the darker Avengers timelines. Pacheco and Merino are master storytellers, and their performance on the page captured every emotion and nuance in the faces of their characters.

For the benefit of anyone who has yet to read this story, we’re leaving out a few key details and spoilers. It’s worth experiencing with the vast majority of the surprises intact. Suffice to say, it ends with an Avengers battle like no other, and it changed the status quo for at least two of the main characters. Even two decades later, AVENGERS FOREVER delivers everything a Super Hero comic should be.