Artist Jim Craig Looks Back at the First Ever Marvel 'What If?'

In 1977, Marvel opened up a new realm of possibilities with the launch of the original WHAT IF? ongoing series. That was the book that allowed creators to explore divergent paths of Marvel history, where the characters made different choices and explored new destinies.

Throughout the month of October, Marvel has released a new series of WHAT IF? one-shots that revisit the concept for modern readers with even more dynamic stories. To celebrate that event, Marvel.com recently caught up with Jim Craig, the artist of the first ever issue of this series—WHAT IF? #1!

Prior to this, Craig had done some ad work for Marvel and a stint at Atlas Comics while trying to break into the industry. Craig told us that he was approached by Thomas to be a part of this story.

“Roy Thomas called me up and asked if I wanted to work on it,” recalled Craig. "He offered WHAT IF?, to which, I thought 'What Isn't?’ That's the genesis. Roy thought it would be a good idea to explore what if the characters didn't have the powers they had or if they had different powers, that kind of thing. I thought, 'Yeah, that's kind of interesting.' I always wanted to work on a regular [book], something I grew up with. Fortunately, the first issue involved the Fantastic Four and Spider-Man, so that wasn't a problem.”

According to Craig, Thomas’ script for the first issue was done in the Marvel method, which left him a lot of freedom to compose the layout of the issue.

“Roy wrote very briefly,” noted Craig. “His scripts were probably a couple of pages, compared to a Doug Moench script, which would be 20 pages for a 17-page story. They were difficult, there was a lot of information in [Moench's scripts]. Roy's [scripts] were, 'Spider-Man fights for a couple of pages, the Green Goblin is starting to win...’ He kind of wrote that way, and in the case of WHAT IF?, he would say 'do a two page spread montage of FANTASTIC FOUR #14.'

“His script on WHAT IF? #1 might have been a little more detailed than he normally handed me,” continued Craig. “But it would be two pages, a montage, capsulize issue #14, capsulize issue #8, that kind of thing. He probably laid it out a little better than I'm explaining it. But he was pretty open to my ideas too. Although, since it was a new book, I didn't have a whole lot of ideas because I was trying to find what I was doing myself. I was more familiar with the traditional books. That was kind of traditional, but not traditional at the same time.”

This was an era before comics were available digitally and the majority of Marvel’s previous issues were not in print. That posed a potential challenge for Craig, since many of the pages were predicated upon echoing the earlier issues of FANTASTIC FOUR and SPIDER-MAN.

“There were a lot of montages of various issues, and even SPIDER-MAN and AMAZING FANTASY #15,” related Craig. “I said, 'Can I have any copies of these things?' And he said, 'We don't have any.' Fortunately, I had Collectors' Items, which were 25 cents comic books when I was a fan a few years before as a teenager. (I was 20 years old when I did WHAT IF?) Collectors' Items was reprinting FANTASTIC FOUR from issue #1 up, so I fortunately had the issues. I don't know what I would have done otherwise.” 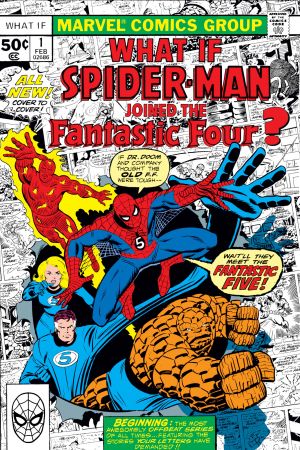 Craig also shared a brief exchange he had with the legendary Marie Severin while working on the book.

“I remember Marie Severin, when I did the origin of Spider-Man, she said, 'These are kind of bland panels.' I said Roy asked me to do Steve Ditko, to do the panels the way they were, only to modernize Spider-Man a little bit, to bring him up to the [John] Romita Spider-Man, but use [Ditko's] layouts. She looked at it and said, 'This stuff's gotta be a little bit more dynamic than that,' and I went, 'I was asked to do that,' and she went, 'Oh, okay.' [Laughs]

“For the first book, I had to see John Romita, and he taught me tricks on Spider-Man I didn't know about, like how the webbing works and all that stuff,” added Craig. “The book was in its infancy, and discovery, and everything else I was just kind of swimming through it like Prince Namor.”

Speaking of the Sub-Mariner, one of the big twists of the issue featured Sue Storm, the Invisible Girl, leaving the Fantastic Five to pursue a relationship with Namor in Atlantis.

“I remember that made me even go, 'Hmm...' I didn't really want that to happen, but it's my job, right? [Laughs] I didn't totally understand that,” said Craig. “But I guess that's another part of the WHAT IF? [story]. To me, the Invisible Girl and Prince Namor was more of a side story, an almost extra bonus of WHAT IF? thrown in."

Craig also shared his thoughts on securing a piece of Marvel’s legacy for himself through WHAT IF? #1’s unforgettable story.

“I guess [fans] did [like the book], probably a lot more than I expected,” said the artist. “That series lasted longer than I thought it would but it really developed and made me happy about being the first guy on it, because I didn't know where it was going to go.”

Read WHAT IF #1 on Marvel Unlimited right now! Then visit your local comic shop to grab the new WHAT IF? MAGIK #1 this Wednesday!