Follow the Ultimates powerhouse back to his formative days!

Unfortunately, not everyone who puts on a costume to defend the defenseless receives the adulation and thanks they so rightly deserve. In the case of Adam “Blue Marvel” Brashear, instead of praise, he received fear and admonishment, just because of the color of his skin.

The 2008 five-issue limited series ADAM: LEGEND OF THE BLUE MARVEL by Kevin Grevioux and Mat Broome kicked off with the villain Anti-Man taking on the Avengers—including Ares, She-Hulk, and Sentry—single-handedly before disappearing.

The story then cut to June 4, 1962 as Anti-Man fought the hero known as Blue Marvel. In addition to trading blows, the two super beings also argued about whether the world should be forced to change or not. The fight ended with Blue Marvel standing victorious over Anti-Man, but with the color of his skin exposed through his torn costume. This resulted in mistrust on both sides of the racial divide.

Back in the present, Tony Stark—then the head of S.H.I.E.L.D.—used his clearance to find out the story behind Blue Marvel and why he hadn’t heard of him. Stark learned that the President called Adam in to face a harbinger from space and he disappeared during the cosmic conflict. 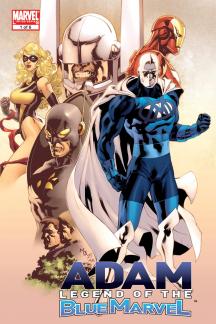 In reality, though, Brashear had been living a normal life married to a deep undercover S.H.I.E.L.D. agent and teaching physics at the University of Maryland. After learning the truth about his wife, Adam flew to the moon and had a conversation with The Watcher. He then met with Iron Man and the other modern heroes to explain that he and Anti-Man got their powers when Brashear’s experimental antimatter negative reactor exploded, consuming both Adam and his best friend Conner Sims. With Anti-Man returned, they used this information and Adam’s experience to take on the threat.

After talks with Namor and Anti-Man, Blue Marvel faced off against the Avengers, lost someone very close to him, and then finally ended his one-time friend’s life-threatening rampage. With his secret life no longer a problem, Adam eventually returned to being a hero, though not as prominently as he had in the past.

Adam Brashear kept something of a low profile after his introduction to the Marvel Universe, but before long joined up with Luke Cage’s Avengers in MIGHTY AVENGERS. As part of that group he faced off against the Illuminati leading into Secret Wars and then stood as a member of the proactive big brain squad appearing monthly in ULTIMATES and now ULTIMATES 2. As part of that group, Adam has helped cure Galactus of his hunger, save Anti-Man from certain death in Exo-Space and fix the fabric of time and space. That’s a pretty respectable track record for a character who’s been around for less than a decade.

Next week kicks off with the man who went from Tony Stark’s best friend to an armored hero in his own right: James Rhodes!