From Iron Man to War Machine and back, an armored hero with few peers!

One of the best things about long-term comic reading is seeing the development of a character into a hero. That’s what readers of IRON MAN got to see in the 70’s and 80’s when it came to James Rhodes.

In his first appearance back in 1979’’s IRON MAN #118—by legends Bob Layton, David Micheline, and John Byrne—Rhodey debuted as Tony Stark’s helicopter pilot, but the billionaire decided to fly the whirlybird himself up to the S.H.I.E.L.D. Helicarrier for a meeting. In issue #120, Rhodes told Bethany Cabe that he’d known Stark since the Vietnam War, and would go on to become an important person in Tony’s present leading up to and after the classic “Demon in a Bottle” storyline.

A few years later, Tony took to the drink again as Obadiah Stane focused on destroying Stark financially. With Tony in no condition to fight, Rhodey donned the Iron Man armor for the first time in 1983’s IRON MAN #170 to defeat Magma. 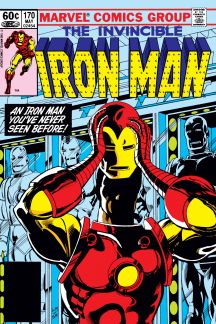 Rhodes wore the suit for a while, taking on villains like Radioactive Man, helping to found the West Coast Avengers, and even participating in Secret Wars. After a while though, the suit took its toll as the helmet had been designed for Stark’s brainwaves. The incompatible hardware drove Rhodey mad, but Tony repaid his friend by standing by him and helping him recover.

After getting some help from Alpha Flight’s Shaman, Rhodey got his head fixed and returned to the armor until a bomb orchestrated by Stane nearly killed him. Rhodes remained good friends with Tony, helping during the Armor Wars story and even taking over the suit a time or two when absolutely necessary.

A badly injured Stark revealed the War Machine armor in 1992’s IRON MAN #281, but didn’t wear it long as he seemingly passed away in #283. In the following issue, Rhodes discovered that Stark not only left him the company, but the War Machine as well.

Rhodey filled the position valiantly for a while until he discovered that Stark didn’t actually die and set out on his own, leading into his first solo series, WAR MACHINE. Since then he’s worn many variations on his familiar armor, filled in for Iron Man, helped save Tony’s life on more than one occasion, and joined groups like S.H.I.E.L.D., the Secret Avengers, the Office of National Emergency, the U.S. Military, the Crew, and the Avengers. 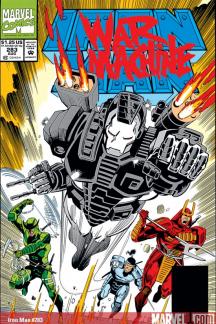 Unfortunately, Rhodes recently fell in battle against Thanos in the pages of CIVIL WAR II #1. He and the other heroes who wanted to use the future-seeing Inhuman Ulysses to stop incidents did so, but at the cost of Rhodey’s life. Enraged, Tony Stark rose against Captain Marvel which launched the entire Marvel Universe into another massive conflict.

Over the years, Jim Rhodes wore more than just the Iron Man and War Machine armors. In the second half of his 1990’s series, he lost the silver armor and wound up with a symbiotic suit called the Eidolon Warwear that granted him a variety of new abilities. Much more recently, Rhodes donned a look originally sported by Norman Osborn. He first appeared as the Iron Patriot in the pages of GAMBIT #13 before continuing on into a five-issue series called IRON PATRIOT, but returned to his more familiar War Machine identity before the events of Civil War II.

Next, we’re sticking with armored heroes who pick up where Tony Stark leaves off with a Riri Williams spotlight!