Captain America in the 1980s

A look back on a momentous decade for the Sentinel of Liberty!

Would you believe that nearly 40 years ago, Captain America’s alter-ego, Steve Rogers, was a struggling artist working on a story called “Ilse -- Lover Prisoner of Stalag 18”? It’s true, and it happened in CAPTAIN AMERICA #241, which is also the first issue of the series that was published in the ‘80s. Inside that striking cover by Frank Miller, Cap had his first encounter Frank Castle, a.k.a. the Punisher.

Mike W. Barr and artists Frank Springer and Pablo Marcos used the Punisher’s lethal force as way to examine Cap’s more merciful tactics. The Punisher wasn’t fully formed yet, as he seemingly had no problem threatening Cap’s life or anyone else who got in his way. In the decades that followed, it was established that Cap was the only Super Hero that Castle truly admired.

Just a few issues later, in CAPTAIN AMERICA #247, John Byrne briefly joined the series as the artist while collaborating with writers Roger Stern and Roger McKenzie. While Byrne’s stint only lasted until CAPTAIN AMERICA #255, he and Stern created some of the most beloved Cap tales of the era. Cap’s two-issue battle with Baron Blood in CAPTAIN AMERICA #253-254 is a particular highlight. McKenzie’s contribution to Byrne’s run came in CAPTAIN AMERICA #250, which explored Cap’s experience when a movement tried to draft him into making a run for President.

The next major run didn’t arrive until CAPTAIN AMERICA #267, when writer J.M. DeMatteis joined artist Mike Zeck for another classic stint. Together, DeMatteis and Zeck reintroduced Helmut Zemo as the new Baron Zemo, revitalized Deathlok, and built towards an epic Cap vs. Red Skull battle in CAPTAIN AMERICA #300. It was a truly memorable way to finish their collaboration which could have also been the last Red Skull story. 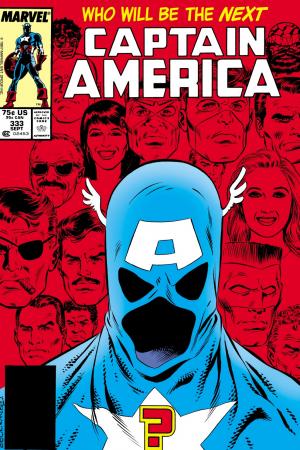 While Rogers simply became “the Captain,” Walker proved to be emotionally unsuitable for the role. In CAPTAIN AMERICA #350, the two went head-to-head in a battle to the finish. Walker ultimately accepted that Rogers was meant to be Cap and surrendered his shield. Essentially, Walker and Rogers traded costumes, and Walker became U.S. Agent, one of Gruenwald’s most enduring contributions to Cap’s lore.

Gruenwald also introduced several other characters that have become closely tied to Cap, including Crossbones and Diamondback. To illustrate Diamondback’s importance to the book at the time, she was even briefly featured in the corner box art with Cap! Diamondback was introduced as a villain in the Serpent Society when she made her debut in CAPTAIN AMERICA #310. But over time, Diamondback developed romantic feelings for Cap and largely turned over a new leaf.

Diamondback and Cap co-starred in “The Bloodstone Hunt” within the pages of CAPTAIN AMERICA #357-362. It was the final major storyline of the ‘80s, and it brought Cap and Diamondback much closer together while establishing trust and partnership between the two. CAPTAIN AMERICA #363-364 closed out the decade with a two-part story about Cap’s first fight with Crossbones while Diamondback proved to be a worthy partner by saving herself.

That’s just scratching the surface of great Captain America stories from the ‘80s. Other tales, including the Scourge of the Underworld, the return of the Red Skull, and more are all waiting to be rediscovered on Marvel Unlimited.