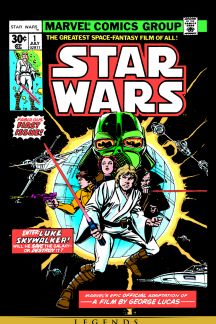 STAR WARS #1, July 1977
At a time when movie-based comics sold poorly as a general rule, editor Roy Thomas convinced Stan Lee to give Star Wars a shot. The result: probably the most important single issue of a licensed comic book in history. Not only would STAR WARS #1 kick off the most successful movie-based comic of all time, the series to follow also proved itself one of the most profitable comics of the late ‘70s, period. It would last until 1986, and all 107 issues can be read through Marvel Unlimited.

Written by Thomas with absolutely iconic art from Howard Chaykin, STAR WARS #1 kicked off a six-issue adaptation of the first film—which hadn’t been given the name “A New Hope” or even “Episode IV” at the time. Starting with Darth Vader’s Star Destroyer in hot pursuit of Princess Leia’s blockade runner, the issue ends with Luke under attack from a Tusken Raider.

Interestingly, we’re treated to scenes cut from the film as well, such as Luke viewing the space battle with his microbinoculars, an exchange with Biggs Darklighter before he joins the Rebellion, and…Vader drinking coffee while he chokes Admiral Motti? Oh, and big-time spoiler alert: This issue hit newsstands on April 12, 1977, a full six weeks before the movie would invent the summer blockbuster on May 25!