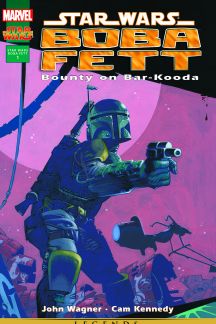 By 1995, Boba Fett had developed a huge cult following from the galaxy of Star Wars fandom—but we knew almost nothing about him. With our only real context for the infamous bounty hunter being his relentless hunt for Han Solo—be that in the movies or in his return from the dead—many fans didn’t realize Boba, like his father before him, started as a simple man trying to make his way in the universe.

In BOBA FETT: BOUNTY ON BAR-KOODA, writer John Wagner and artist Cam Kennedy present us with a new perspective on the character. Sure, Boba plays to type as the relentless bounty hunter we would expect, but we’re also forced to realize that not every prize he pursues necessarily affects the outcome of galactic civil war; sometimes a Hutt just wants to impress his crush’s father by hiring Fett to take out a bothersome space pirate. Told in a very tongue-in-cheek manner—the pirate Bar-Kooda himself just happens to resemble a humanoid barracuda, for example—this one-shot nicely mixes a sense of fun with a lower-stakes day in the life of galactic bounty hunting.