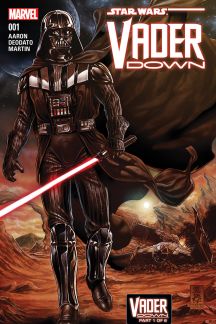 As the writer of 25 issues of DARTH VADER, Kieron Gillen knows a thing or two about scripting amazing moments for the iconic Sith Lord. But, when asked to name his personal favorite moment in Star Wars comics, he’s quick to cite the last few pages of STAR WARS: VADER DOWN #1 by Jason Aaron.

“Vader facing an entire rebel army,” recounts Gillen. “One brave soul shouts at him: ‘Lay down your weapons! You’re surrounded!’ Vader raises the red saber and addresses the crowd. ‘All I am surrounded by is fear. And dead men.’

“And the crowd goes wild. Jason Aaron, Mike Deodato and Frank Martin Jr. basically give the single most defining image of Vader in the new Marvel comics. I can only applaud. And seethe with professional jealousy, of course.”