Tales of the Jedi shows us the Force warriors in their prime!

“For over a thousand generations, the Jedi Knights were the guardians of peace and justice in the Old Republic,” Obi-Wan Kenobi told Luke Skywalker in “A New Hope.” But even as late as 1993—16 years after those words hit the screen—we as fans knew nothing more about any of those generations than that one of them included something called Clone Wars. Writer Tom Veitch and artist Chris Gossett changed that with the novel idea behind STAR WARS: TALES OF THE JEDI.

Set 4,000 years before the events of the Star Wars films, TALES OF THE JEDI dared to introduce us to an entirely new cast of characters from a time much longer ago in a galaxy far, far away from any that we’re used to. Though this limited series only last for five issues, the journey of protagonist Jedi Knight Ulic Qel-Droma would continue to other TALES OF THE JEDI series such as THE FREEDON NADD UPRISING and DARK LORDS OF THE SITH, wherein he fell to the dark side millennia before Anakin Skywalker. 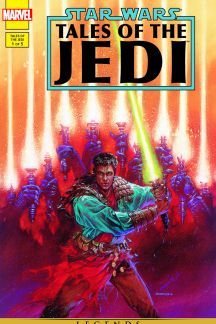 The influence of TALES OF THE JEDI can perhaps best be felt in Star Wars video games. In “The Clone Wars” for Xbox, GameCube and PS2, Ulic speaks to Anakin as a Force ghost, warning him of the dangers of falling to the dark side. But more importantly, TALES OF THE JEDI partly inspired what many consider the best Star Wars game of all time: “Knights of the Old Republic” for Xbox and PC.

“Deciding to set ‘KOTOR’ 4,000 years before the original trilogy was very much inspired by the TALES OF THE JEDI comics,” says Mike Gallo, LucasArts’ producer on the game. “In fact, that was our original working title internally. We also had ‘Age of the Jedi’ on the table, as a bit of a play on the GOLDEN AGE OF THE SITH comics and to differentiate from TALES. But it turns out ‘Knights of the Old Republic’ would be a pretty great title in its own right!”

Of course, that circle would become complete with the launch of STAR WARS: KNIGHTS OF THE OLD REPUBLIC comics in 2006.