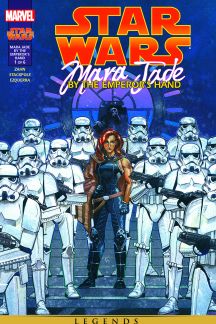 If you know HEIR TO THE EMPIRE and the rest of the “Thrawn Trilogy,” then you’re very familiar with Mara Jade, one of the greatest new characters created by writer Timothy Zahn. As the Emperor’s personal assassin—aka, the Emperor’s Hand—she believed Luke Skywalker killed Palpatine and set out to take her revenge. But what about her days of serving The Emperor? Typically a novelist, Zahn himself developed a story exclusively for comic books to tell this tale—STAR WARS: MARA JADE: BY THE EMPEROR’S HAND—with fellow Star Wars author Michael A. Stackpole acting as writer and Carlos Ezquerra illustrating the adventure.

Right away we’re greeted with a very familiar setting, as Mara pleads to board Jabba’s skiff and assist with the execution of Luke Skywalker, as seen in “Return of the Jedi”—we learn Palpatine sent her there to capture him and bring him before The Emperor. When Jabba denies her request, she reports back to her master that she proved unable to kill Luke, then finds herself on a quest to assassinate the leader of Black Nebula—an offshoot of Black Sun, which you may remember from SHADOWS OF THE EMPIRE. By issue #2, she learns of the Emperor’s demise through the Force—though in the way he wants her to see it. But that doesn’t mean she’s done with her mission…