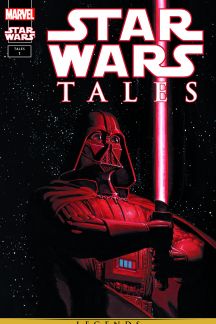 You have to admire the idea behind STAR WARS TALES. Though Star Wars fans can be sticklers for the importance of continuity across all media, TALES decided to eschew all that and focus one thing: fun stories. Each issue features a series of unrelated vignettes designed solely to entertain, without the burden of needing to stay in line with any canon but that of the four films released to this point.

STAR WARS TALES #1 illustrates the series’ ideals beautifully with four completely independent stories, each unique in tone and setting. For the Prequel fans, we see Master Qui-Gon Jinn instilling his wisdom to Padawan Obi-Wan Kenobi as they explore the planet Arorua in the years before “Episode I.” After that, Timothy Zahn presents a Mara Jade adventure set between the events of “Return of the Jedi” and HEIR TO THE EMPIRE; Mara returns for a cameo in a Galactic Civil War-era Darth Vader story by Ron Marz.

But it’s Peter David who not only takes the idea of having fun with Star Wars and runs with it, but also delivers the most memorable story of the bunch with “Skippy the Jedi Droid.” Remember the droid that Uncle Owen almost bought, but it had a “bad motivator”? As you’ll learn in this delightfully non-canon exploit, that’s Skippy—also known as the much less fun-sounding R5-D4—and the “motivator” for that event occurring had nothing to do with malfunctioning electronics. It’s a must-read for Star Wars fans just looking to enjoy themselves—which should be all of us.