Han Solo has a historic date with a bounty hunter on Ord Mantell! 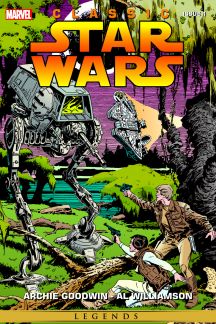 If you’re inclined to assume that these stories never fit into Star Wars canon, CLASSIC STAR WARS #1 will squash such presumptions right away. The comic reissues an early-‘80s tale by Archie Goodwin—who also wrote many Marvel STAR WARS comics of that era—and penciler Al Williamson released by the LA Times Syndicate. Goodwin used knowledge gleaned from “The Empire Strikes Back” to craft a throwaway movie line into an entire story set between the first two films. Remember when Han tells Leia he’s leaving the Alliance because “The bounty hunter on Ord Mantell changed my mind?” Goodwin introduces us to Skorr—i.e., said bounty hunter!

The story of this encounter lasts through CLASSIC STAR WARS #2 and remains remarkably readable as a cohesive comic book arc, despite the chopped-up nature of its original media vehicle. It’s classic Star Wars, indeed.