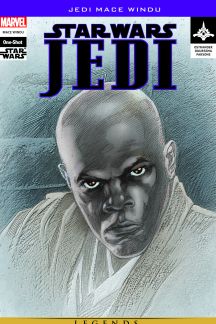 When you cast the eventual Nick Fury as a Jedi, the character becoming popular is a pretty sure bet. Such was the case with Mace Windu, a fan-favorite hero of the Prequel era. A regular in comics of the day, his one-shot is worth a look for two reasons: Not only does it cast the limelight squarely on Samuel L. Jackson’s Jedi Master, it also marks the comics debut of one of the most popular adversaries of the Clone Wars—Asajj Ventress.

Set three months after the Battle of Geonosis that ended Episode II, STAR WARS: JEDI – MACE WINDU centers around a meeting on the planet Ruul of Windu and Jedi dissidents, disillusioned by their role in the Clone Wars. Their conversation provides a fascinating glimpse into the psyches of the galaxy’s protectors at the time, who now find themselves generals in a war. How does one whose purpose is to protect life deal with leading armies of men destined to die? As we find out, some handle it better than others.

At the same time, Count Dooku has heard about this gathering and suspects that the Jedi in attendance could be swayed to fully defy the Republic and join the Separatist movement. To “persuade” them, he sends Asajj Ventress, his dual-lightsaber-wielding apprentice whom some fans had seen for the first time in Genndy Tartakovsky’s 2D-animated “Star Wars: Clone Wars” shorts. Her enthusiasm for fulfilling the mission is only enhanced by her quest for vengeance against Windu, whom she blames for the death of her master before she turned to the dark side.

Ventress may not fulfill all of her objectives by issue’s end, but she has definitely left her mark as a force—with the Force—to be reckoned with in the many Clone Wars battles to come. In STAR WARS: REPUBLIC #71, she would even leave a literal mark on Anakin Skywalker, who has Ventress to thank for the scar over his eye seen in “Revenge of the Sith.”