The Jedi attempt one last stand against Darth Vader after Order 66.

In late 2005, Star Wars fans found themselves in an unfamiliar position—actually knowing exactly what happened on Anakin Skywalker’s road to becoming Darth Vader for the first time in the franchise’s history. With no new movies in sight, they turned to the Expanded Universe (now known as Legends) to learn more about something else they remained very curious about—the years between “Revenge of the Sith” and “A New Hope.” One of the first stories set in this new Star Wars writers’ playground was STAR WARS: PURGE.

As far as Emperor Palpatine was concerned in the early days of his galactic rule, Order 66 did its job. Though some Jedi survived, he wiped out enough of them to eliminate the threat they posed to his rule of the galaxy. But Darth Vader wasn’t done—especially when it came to tracking down his former master, Obi-Wan Kenobi. 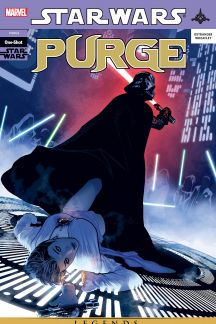 PURGE presents the new Sith Lord with his first great test since Obi-Wan defeated him on Mustafar. Driven by vengeance, Vader continues to purge the galaxy of any remaining Jedi, but not before first using them for information on Kenobi’s whereabouts. Knowing this, a group of eight surviving Jedi sets a trap—surely, eight Force users against one gives the Jedi a huge advantage. You probably already know how things turn out for them…