C-3PO gets his red arm…and an unlikely new friend.

“You probably don’t recognize me because of the red arm,” says C-3PO in “The Force Awakens.” Though most of us were probably too caught up in seeing Han and Leia together for the first time since 1983, many fans were indeed puzzled by 3PO’s differently hued appendage. The story behind it anchors the STAR WARS SPECIAL: C-3PO one-shot—and even though droids comprise almost the entire cast of “The Phantom Limb,” James Robinson delivers one of the most truly human stories in all Star Wars comics. 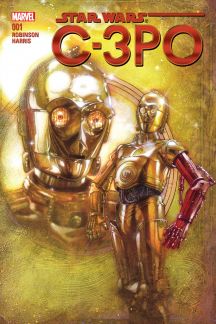 As we find out early on, the First Order has kidnapped Admiral Ackbar, but the Resistance has managed to capture an Imperial droid named Omri that it believes knows Ackbar’s location. However, the ship carrying Omri has crashed, killing its human passengers and deserting eight droids on a dangerous planet. The seven Resistance droids declare a truce with Omri until they can get to a vessel detected by 3PO to send a distress signal.

Along the way, attacks from spice spiders, man-sized hostile insects, and tentacle monsters—one of which literally dis-arms C-3PO—dwindle the group’s numbers from eight to two…just Threepio and Omri. Their perilous trek has bonded the two enemies at a “human” level, with each pondering his own existence and lot in “life,” even relaying faint memories that should have been completely erased by memory reboots.

As C-3PO and Omri reach their destination, a deadly acid storm prevents them from delivering the distress signal. In the name of friendship, Omri relays Ackbar’s coordinates to C-3PO—then he braves the acid rain, sacrificing himself to call for help. Before destroying all of him but his arm, the acid also revealed a red primer underneath the differently colored paint job Omri had known all his life. When Poe Dameron rescues 3PO, the droid tells Poe that Omri’s remaining limb should replace the one he himself lost.

“You have no idea how this arm offends my aesthetic sensibilities,” he tells BB-9. “Nevertheless…I will keep it for a while to remember.”