Princess Leia sets out on a personal mission in the name of Alderaan.

With all of the princess rescuing and Death Star destroying that occurs in the last half of “A New Hope,” you’d be forgiven for never considering the psychological effects an earlier major plot point may have had on one of the main characters. But even after a huge victory for your cause, how would you react if your entire planet had been blown apart, ending the lives of billions of others at once? In his PRINCESS LEIA five-issue limited series, Mark Waid tackles that very subject for the eponymous Alderaanian royal. 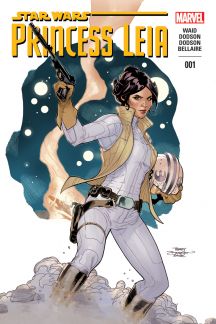 PRINCESS LEIA #1 begins in a familiar manner, with the former Imperial senator presenting medals to Luke and Han for their bravery at the Battle of Yavin. From there, she delivers three sentences in remembrance of “the lost souls of Alderaan,” and the speech’s brevity rubs an Alderaanian pilot named Evaan the wrong way. As she’ll soon tell Leia herself, Evaan found the lack of time devoted to memorializing their home planet disrespectful and cold. At the same time, she informs Leia that the Empire is hunting down all remaining Alderaanians in the galaxy—which drives Leia to action. Teamed with Evaan and R2-D2, the princess sneaks out of Yavin—against the wishes of General Dodonna, who has pointed out the 10-million-credit price on her head—to, in Leia’s own words, “find, gather and protect every last surviving son and daughter of Alderaan.”

After escaping a halfhearted attempt to stop her by Luke and Wedge, the issue concludes with Leia posing a question to Evaan that should intrigue any Star Wars fan: “Will you at least get me to Naboo?”