Another highlight moment for Boba Fett in the pages of Dark Empire! 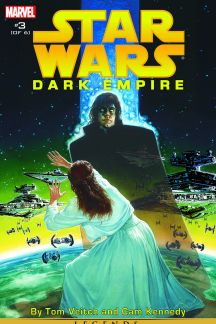 Remember, we’re talking six years after “Return of the Jedi” here, and DARK EMPIRE #3 ends with a message for Han Solo that he shouldn’t be getting: “A Mr. Fett here to see you, sir,” his servant droid Zee-Zee tells him.

Cut to the first panel of DARK EMPIRE #4: “Greetings, Solo.” It’s Boba Fett, the legendary bounty hunter…who’s supposed to be in the Pit of Carkoon being feasted upon for another 9,994 years. “The Sarlacc found me somewhat indigestible,” he explains.

And that’s all there is to it. With that simple explanation, one of the most popular Star Wars villains of all time gets a new lease on life, collecting bounties throughout the galaxy for years to come.