It all goes back to the “Weapons of Mutant Destruction” storyline in WEAPON X. Dr. Alba’s goal was to create a Hulk/Wolverine hybrid to do his nefarious bidding. Enter: subject Clayton, a.k.a. H-Alpha. Clay was ex-military before coming under the power of Weapon X’s Batch-H division and, unlike the other test subjects, he wasn’t personally recruited but rather was sold into the project. The doctor also left a bit more of his brain than the others, hoping that this would keep Clay’s military training and discipline intact, potentially making him a better minion. He seemed like the perfect candidate. No one ever expected him to go rogue, but that’s exactly what he did. With his creators destroyed once and for all, Clay was finally free.

Though the memories of his past were murky, Clay knew he had a family out there and so he traveled from one Eaglestar facility to another, wiping out any files they had on him and anyone close to him. Of course, this also meant that Clay was destroying any chance of ever reuniting with his family again… but protecting them also means protecting them from himself.

This is where we meet Clay in WEAPON H #1 by Greg Pak (INCREDIBLE HULK) and Cory Smith (X-MEN BLUE)—available March 21! Clay is still on the run when a new kind of Wendigo threatens the safety of those around him. Can Clay really sit this one out, or is it time that this wayward test subject decides to be a hero at last?

We asked writer Greg Pak and artist Cory Smith to give us as many hints as they dared!

Marvel.com: I know you both brainstormed together for the inception of this longer run—what aspects did you guys need to fiddle around with the most when you started working on this series?

Greg Pak: Well, we had a great phone conversation where we started talking through what makes our guy tick and what he really WANTS. We’ve got a guy who’s part Hulk, and the Hulk traditionally just wants to be left alone, right? But we wanted to be sure we had a proactive, character-based mission for our guy. Can’t reveal too much for fear of spoilers… but I’m loving how this is coming together.

Cory Smith: One of the cooler parts of this project, for me, was to be included in some of those initial brainstorming sessions. Greg and our editor, Darren Shan, really welcomed me into the process and we had a great talk about this series that probably went longer than any of us expected [laughs]. We wanted to fit Weapon H into the larger Marvel mythos in a way that was different than the way Hulk or Wolverine did! I threw out a few random references to some Marvel lore and characters in our phone call, and when Greg turned in a story outline later that week I was surprised to see some of the things I mentioned were included! That’s when I knew this was going to be fun.

Marvel.com: That does sound like fun! What can you tell us about Clay as a character, his origin, and his unique set of powers?

Greg Pak: As we learned in the pages of WEAPON X, Clay is a former soldier who ended up working for a military contractor called Eaglestar. But when ordered to massacre a village of civilians, he instead gunned down his fellow mercenaries. He was then sedated and sold to the Weapon X program, which partially lobotomized him and augmented him with Hulk and Wolverine DNA in the effort to create the perfect human weapon.

Marvel.com: Is it difficult to write/draw the juxtaposition between military discipline and unbridled power in one character?

Greg Pak: I’m having a great time with it. I’ve written Hulk stories for years—a little over a decade, in fact! I’ve written a scientist as a Hulk (Banner), a barbarian as a Hulk (Skaar), and a cocky kid as a Hulk (Amadeus). But now I’m writing a grunt, a trained, disciplined soldier as a Hulk. And that’s a great new dynamic that opens up a whole set of new stories and themes to play with.

Cory Smith: I really like what Greg and co. have set up with Clay’s military background and how that would affect/influence a guy with this much power. He’s this unstoppable force of nature with the discipline to command or restrain that part of himself as he needs it. It’s kind of unprecedented, really. (And a whole lot of fun to draw when he cuts loose.)

Marvel.com: Hulk and Wolverine have been rivals since 1974’s INCREDIBLE HULK #181; did you guys research the old scuffles to bring this union of the two heroes to life?

Cory Smith: I did! I looked that issue up on the Marvel Unlimited app to see if I could absorb some of that classic Wein/Trimpe greatness into my pages. Whether or not I succeeded is another story, but it was neat to study that stuff.

Greg Pak: [Laughs] Haven’t actually gone back to dig into those myself—but I should! In the fullness of time, it seems likely that a Hulkverine is gonna have to tangle with the Hulk and Wolverine, doesn’t it? 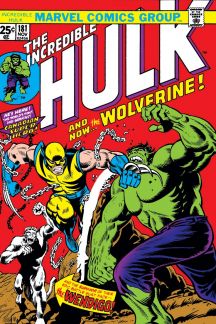 Marvel.com: Clay has been making a concerted effort not to remember his (somewhat) forgotten past. Why is this?

Greg Pak: Clay’s no dummy—he’s a great soldier and strategist. So he’s quickly realized that if his enemies learn about his past, they can use his family against him. Now he’s determined to destroy any evidence of his past in order to protect his family.

Marvel.com: Are the powers tied to his emotions like the other Hulks? How do you guys play with that?

Greg Pak: They aren’t! That’s an important distinction, actually. Clay was specifically chosen for experimentation because of his tremendous discipline and control so he can control his transformations in and out of his Hulkverine form. That gives us a different dynamic from the typical Hulk paradigm that opens the door to some interesting new stories.

Cory Smith: Yeah, like Greg said, Clay is a different type of character than those who have been Hulks before. He’s been trained to control his emotions and keep a level head under fire, so when you put that type of mind into a giant Hulk monster with Wolverine’s claws it’s kind of frightening in a brand new way.

Marvel.com: What can you tell us about this new Wendigo?

Greg Pak: We’re calling it the Ur-Wendigo, and it’s bigger and badder than any Wendigo you’ve ever seen. The basic idea of the Wendigo in the Marvel Universe is that it’s a curse that falls on people who commit the sin of cannibalism—the cannibal becomes a Wendigo, a ravenous, human-eating monster. All that remains true in this incarnation, but we’ve got a big, fun, creepy twist that takes our guy to the next level. Keep on reading!

Cory Smith: Greg and Darren really encouraged me to go wild with the design for the Ur-Wendigo. With that twist that Greg mentioned in mind, there’s something different about this incarnation of the Wendigo, and it’s reflected in his physiology and how he moves. The idea was to make something powerful and scary enough to be a major threat to a guy like Weapon H, which is a pretty tall order.

Marvel.com: What was the hardest thing to write/draw for this first book?

Greg Pak: We’ve got some moments of quiet tension that build up our character before we reveal him in his Hulked up form. I LOVE those moments, and I think they’re absolutely critical for helping us care about the character before the action kicks in, but there’s always a balancing act of how long you can sustain things before you let him cut loose. I think Cory’s doing a tremendous job of maintaining the tension and mystery through those early moments, so I’m feeling good about it. And the action goes through the ceiling when it kicks in, so get ready for it!

Cory Smith: This first issue feels a little like “Jaws” in the sense that when you see our monster, it’s really in moments that are earned in the story when the tension has built to a fever pitch. Greg does such a great job building the story around these scenes. I think the hardest part for me has been holding back until it’s time to draw them.

Marvel.com: What has been your favorite part of creating this series so far?

Greg Pak: There’s an eerie moment in the first few pages when Clay’s trying to disappear. He literally slices off his finger pads to try to hide his fingerprints—but they just grow back. It’s creepy and eerie and Cory’s drawn it beautifully.

Cory Smith: The collaborative process for Weapon H has been different than anything I’ve worked on before, and it’s made working on the book really rewarding. There have been minor design decisions regarding Weapon H’s look throughout this first issue that I’ve probably annoyed Darren to death mulling over, but turning in pages and finding that everyone is happy with the direction I’m taking with the art has been awesome.

Catch up with Clay on March 21 in WEAPON H #1, written by Grek Pak with art by Cory Smith!