The High-Flying History of the Falcon

Powerful points in Marvel’s massive milestones are what score all-new Facsimile Editions—those riotous reprints of mighty mags with everything included, original ads and all! We just love ‘em! And, available at your local comic shop now, one of the newest of the Facsimiles made us pause and ponder the super significance of it: CAPTAIN AMERICA #117!

When it made its dashing debut in 1969 it offered up an original character that immediately made history, the wondrous Sam Wilson! To honor the hero, join us now on a jaunt through some fabulous facts about the Falcon!

The Falcon first found his fame on a tropical island!

It was during one of those tumultuous times when Captain America would up in the body of his eager enemy, the Red Skull, due to the villain’s capering and cavorting with the Cosmic Cube…in CAPTAIN AMERICA (1968) #117, to be exact. At first it was a flyin' falcon who came to Cap’s aid on a tropical island way out in the middle of Nowheresville, but soon after, our hero met the man who would soon become the newest Super Hero in the Marvel pantheon: Sam Wilson! 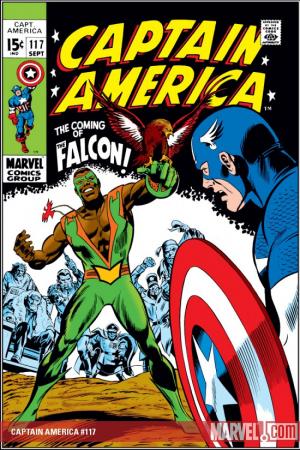 Sam told Cap he’d come to the island to answer an ad to teach falconry to unknown persons, but ended up aiding the locals against the dictatorial diehards known as the Exiles. Cap, with his Red Skull face disguised, began to teach Sam about how a mask and a costume could be seen as symbols, and so the Falcon was born! In CAPTAIN AMERICA (1968) #118, he inspired the island’s population to rise up against their tormentors and take charge once and for all.

Then, in CAPTAIN AMERICA (1968) #119, Sam learned who the man was who’d trained him in the fine arts of fisticuffs—none other than the Sentinel of Liberty himself. Oh, and they scored a pretty big victory against the rascally Red Skull, too, together marking a momentous moment in mighty Marvel history.

The Falcon won his wings from Wakanda!

At first, the Falcon wasn’t able to wing it along with ol’ Winghead, but by the time CAPTAIN AMERICA (1968) #170 rolled around, Sam was sick of being what he saw as the weaker half of his partnership with Cap and decided the Falcon needed to fly…and so he did. Sam went to the one man he knew would be able to fashion the finest feathers for him: the Black Panther. 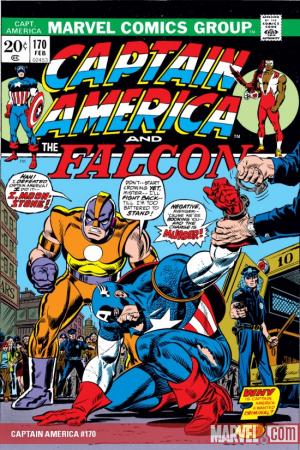 While Cap struggled with a sting operation aimed at getting the Star-Spangled Hero locked up for murder, the Falcon flew off to Wakanda with T’Challa and waited in the wings while the wizard worked up some, err, wings for him! They made their dazzling debut in CAPTAIN AMERICA (1968) #171—though it took a few tries for Sam to get the hang of ‘em. Soon enough, though, he’d returned to America and met up with Cap to lend a pinion or two to his buddy’s false rap, putting both of the heroes on the run from the law and heading into even deeper trouble.

Now, the Falcon’s upgraded his flying rig more than once over the years, but it’s hard now to look back and think of a time when we didn’t see Sam up above it all, flying along with the birds he loves and getting a falcon’s view of all the villainy below.

The Falcon has a puzzling past!

Settle in, heroes, this will take a small sliver of ‘splainin’! Back in CAPTAIN AMERICA (1968) #186, the Red Skull revealed that he’d used the Cosmic Cube to warp some weirdness around Sam Wilson and made a good man out of a criminal! Yeah—wait, what? Well, it seemed at the time that our pal Sam was actually an outlaw named “Snap” Wilson, a law-breaker and a louse! Cap was stunned, to say the least! 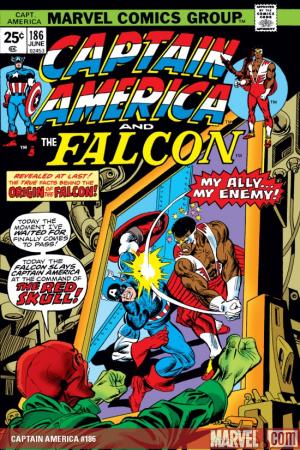 It all wound up going to trial in CAPTAIN AMERICA (1968) #191 when Sam said he needed to account for his past, despite how he felt in the present. The judge threw the book at the Falcon and pronounced him guilty of all of “Snap’s” charges…but he also suspended his sentence if Sam would make up for his malicious moments as he was looked over by S.H.I.E.L.D.’s Nick Fury!

Now, so we don’t leave you on such a depressing note, a new wrinkle in the towering tapestry came out about eight years later in CAPTAIN AMERICA (1968) #277 when readers learned that Sam had actually always been a good person from the get-go! And the “Snap” persona was just that: the false face of a troubled young man whose parents were both killed when he was a kid. The Falcon embraced his past and flew even higher knowing he could finally put it all behind him.

In this article: Sam Wilson