Charles Soule on the Fall of a Knight and the Rise of a Dark Son.

With great power, there must also come great … fear, which leads to anger. And anger leads to hate. Hate leads to suffering. Such is the path Anakin Skywalker chose when he donned the mantle of Darth Vader and began his role as Sith Lord and Apprentice to the Emperor.

In Charles Soule and Giuseppe Camuncoli’s current run on DARTH VADER, the pair tell a story about Vader’s coming of age. We see him start his journey through his search for a kyber crystal; but unlike the challenge he faced as a student in the Jedi Temple, he must claim one from a Jedi and bend it to his will. And as we see, this proves to be no mean feat!

As Soule and Camuncoli continue to unfold the initial days of Vader’s journey further into the dark side, we begin to see there are more boundaries the nascent Sith Lord crosses on his pursuit of ultimate power over his enemies and the galaxy as a whole. We spent a few minutes chatting with Soule about Vader and the man he once was … and how far gone he has shifted away from the beloved Jedi Knight of old.

Marvel.com: Anakin’s forbidden romance with Padme Amidala eventually was key in turning Anakin to the dark side. Do you think this was one of the reasons the Jedi forbid the members of their order to maintain such emotional attachments? Or perhaps the Jedi were too strict in their vows and sowed the seeds of their own downfall in not allowing the Jedi to embrace their emotions more fully?

Charles Soule: Because I’ve been lucky enough to write a bunch of Star Wars stories set in all three of the major timelines active right now (Prequels, Original Trilogy and Episodes 7-9), I’ve thought about questions like this quite a bit. I can’t presume to know exactly what George Lucas intended by depicting the Jedi the way he did in the Prequels, but it certainly feels to me like they had become somewhat complacent, maybe even proud, after being ascendant for so long. I’m sure the “no attachments” rules made perfect sense at one time, and probably worked pretty well in most cases – but there are always scenarios that fall outside the rules, and Anakin and Padme seems like it was one of them. 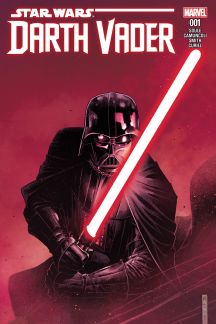 Marvel.com: Watching Episodes I-III, it becomes increasingly clear how Palpatine quickly identifies Anakin and begins grooming him for apprenticeship. Does it ever strike you that none of the Jedi Masters were able to pick up on this at all?

Charles Soule: Palpatine is pretty sly and subtle, and I think the Senate and the Jedi worked closely with each other all the time. I don’t think it’s that unusual that Palpatine would cultivate relationships with some of them – I doubt Anakin was the only Jedi he hung out with.

Marvel.com: Looking back, how aware do you think Vader is of Palpatine’s orchestration of his downfall and turning to the dark side?

Charles Soule: I don’t think he saw it coming. I really don’t. I think he’d been told for so long that he was a perfect Jedi, the Chosen One, and that he could resist any temptation. He knew Palpatine had forbidden knowledge, but I think like many young people, he was pretty sure he could handle it, and knew better than those stodgy Jedi trying to keep him from saving the life of his great love.

Marvel.com: In looking at the story you’ve already revealed, with Vader’s search for a kyber crystal of his own to corrupt, there’s a real feeling that there isn’t much sacred to him. Are there any lines he won’t cross at this point?

Charles Soule: Public nudity. Beyond that, though… I think he’s seeking out darkness, because he wants to hide from his own actions and the price he’s paid for them. For Vader, at least right now, the darker the better.

Marvel.com: Speaking of crossing lines that shouldn’t be crossed, what can you share with us about your research into the Sith? What forbidden knowledge did you gain, and was there anything you came across that was of particular interest and/or surprised you?

Charles Soule: We actually still don’t know that much about the Sith. Because there are only ever two at a time, and because they always lie to each other, it means that Sith “knowledge” is probably rewritten constantly to serve the needs of whichever SIth is master at any given time. I don’t think we can trust anything any Sith says, from Vader to Palpatine to Tyrannus, all the way down to Bane. 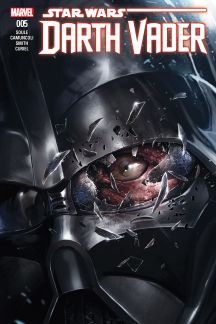 Marvel.com: I won’t point out the fact that last point is deals in absolutes, Charles …

Moving forward with DARTH VADER, we’ve seen Anakin kill fellow Jedi (including younglings), destroy communities, and seemingly shed the last vestiges of his humanity and former self. Is there anything left for him at this point or are all aspects of the past Jedi Knight lost until the coming of Luke?

Charles Soule: Hmm. I bet if there was anything he particularly liked to eat before, he still likes it after becoming Vader. That sort of thing doesn’t really change. Doesn’t mean he can actually eat it, though. Poor Vader. More machine than man.