Not just a crazy call-to-arms or wary watch-out—oh, no, True Believers! It’s also the nutty name for the newest and grooviest event ol’ Marvel’s preppin’ for you and your peerless peepers! INCOMING! #1 will set the stage for significant surprises surfing your way soon…and believe us when we state you better get in on the ground floor for this one!

Say, this gives us a few intense ideas involving INCOMING, some frantic facts about pieces and players that may just be the ticket to get you in the groove for the goings-on…

Didja Know… Eternity’s the living embodiment of the universe?

Huh? Eternity? How’d he pop up in this itemized itinerary about INCOMING? Read along, Marvelite and all will be revealed!

Eternity’s big. We mean big-big, and if there’s one thing Marvel does best, it’s big—and you’d be pretty hard-pressed to get bigger than Eternity. Our ol’ pal Doctor Strange met him in STRANGE TALES (1951) #138 while fretting over a fight with Mordo and the dreaded Dormammu, and when Doc finally glommed his gapers on Eternity, well, whew! His mind boggled! 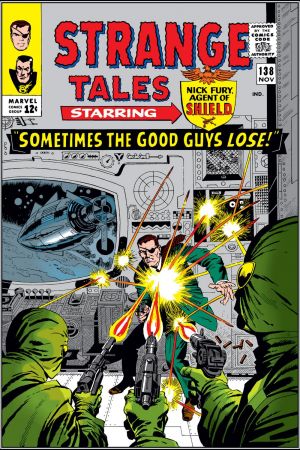 To put it mildly, imagine if the entire blamed universe, every bit of it from side to side, top to bottom, and everything in-between could talk and think and walk around just like us humble humans. Got it? Okay, now envision a little piece of him got loose and somehow formed into a fine little bit of face-ware. Not a hat or anything like that…say a mask.

Didja Know… the Masked Raider’s one of the earliest Marvel heroes of all?

Now, just hold onto that headache, Harry, ‘cause we’re still buildin’ this thing. See, the Eternity Mask’s not well known in the hallowed history of Marvel, but it’s about to become pretty darn important thanks to INCOMING. Why? Glad ya asked, and nicely. It’s because its current owner, the Masked Raider, is taking center-stage for the frenetic festivities about to unfold.

The new Raider’s not the original, nossir; that honor hangs over a dude named Jim Gardley who debuted in MARVEL COMICS #1, the bountiful book that kicked off the Marvel Universe back in 1939 and gave us such scintillating superstars as the Sub-Mariner and the Human Torch—and of course, the Masked Raider, the very first Western wahoo Marvel ever saw saddle a horse and ride it into the sunset.

And the Eternity Mask? Like we said, it’s a little bit o’ Eternity and grants the wearer the equal strength and abilities of the person they’re up against, as well as notes every nod and knothole of just how the universe works…and if that ain’t cool, we just don’t know what it is!

So, when you’re casting cool, ya gotta include the bestest, most greatest private eye in the Marvel Universe, Jessica Jones. And yep, you’ve guessed it: she’s one of the shining stars who’ll be involved in INCOMING. ‘Cause where there’s a murder, Ms. Jones can’t be too far behind.

As some of you may know by now, Jessica started off as a Super Hero with the jazzy moniker of Jewel, but things went sour with that deal and she retired the role. Later she tried it again as Knightress, a darker but still dashing idol, but that went south, too. What’s the third time, you intone? And why wasn’t the third the charm? Well, it was Power Woman, and as to why she’s just plain ol’ Jessica Jones now…why don’t you ask her?

Regardless, Jones and her Super Hero buddies are on the case in INCOMING #1, and good thing, too, because once they cross paths with the all-new Masked Raider and his Eternity Mask—see how neatly we nudged all that together?—the Marvel Universe ain’t gonna be big enough to contain all the fireworks. Hey, Eternity; we’re gonna need a bigger cosmos!

Peruse these eye-poppin' publications with Marvel Unlimited right now! Then visit your local comic shop to read INCOMING ! #1 on December 26!