Doctor Strange Solves His Own Murder!

Revisit the Sorcerer Supreme's most important investigation of his career.

In 2006 and 2007, Brian K. Vaughan and Marcos Martin teamed up to present a timeless instant classic called DOCTOR STRANGE: THE OATH. The five issue limited series kicked off with Wong dragging Doctor Strange into Night Nurse’s office, victim of a gunshot wound.

While she fixed the Sorcerer Supreme on the physical plane, Strange’s astral projection informed Night Nurse that he battled a cat god to retrieve a cancer-killing elixir in order to cure Wong’s brain tumor. Later, a thief named Brigand shot Strange with a silver bullet fired from the gun Hitler used to commit suicide which carried enough bad vibes to penetrate the mystic’s shields.

Brigand made off with the elixir, but Strange, Wong, and Night Nurse eventually found him. A fight, starting in the physical realm and then moving into the magical one, quickly ensued. Brigand realized that he stood outclassed and, metaphorically speaking, outgunned and gave up his boss: Doctor Nicodemus West, the head of Timely Pharmaceuticals.

Dr. West entered Strange’s life as one of the surgeons who helped fix his hands after the initial crash. However, after Strange left to seek the Ancient One, West found himself left with Stephen’s patients, many of whom died. Wracked with guilt, West intended to find Strange and truly heal him so he could return to medicine. 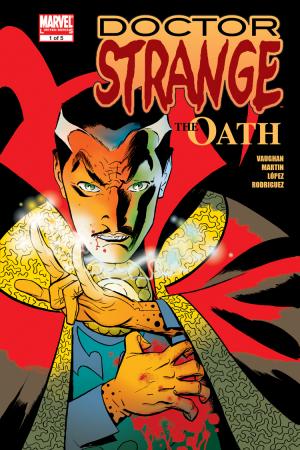 Instead, he got to the Ancient One just after Strange left and trained in secret. Upon returning to New York City, West tried saving one of Strange’s patients with magic and wound up killing him in the process. Timely soon swooped in and hired the doctor to have someone mystically inclined on their staff. West wanted to help as many people as possible, but essentially sold his soul to do exactly that.

Even with the elixir in his hands, West delayed in dumping it down the drain. As Strange pointed out, no one truly worried that the cure to all diseases would have a true negative effect on Earth, but that it would prove his failure as a sorcerer trying to use magic to heal.

Strange and West ended their battle dramatically on a rooftop where the latter suspended all magic for three minutes so the two could duke it out. Though it seemed like West gained the upper hand, Strange revealed that he’d been studying martial arts with Wong all along and knew a thing or two about self-defense.

In the end, West tumbled from the building, taking the elixir with him. This left Strange with a conundrum: use the last drop to cure all human diseases or give it to Wong to save his life. In the end, he chose his friend, a decision that not only helped him fulfill his Hippocratic oath, but also endeared him further to Night Nurse, who agreed to stay in the Sanctum Sanctorum to continue her practice.

Vaughan included a few nice nods to not only Doctor Strange’s history but also that of Marvel itself in the pages of THE OATH. You probably noticed that the pharmaceutical company shares a name with Marvel’s predecessor, Timely Comics. Timely published classics like MARVEL COMICS and CAPTAIN AMERICA COMICS back in the 30’s and 40’s. By the time Doctor Strange appeared, the company had been renamed Marvel Comics, but many of the characters carried over. Also, check out the name of the panacea: Otkid elixir. Shift those letters around and you get the name of the artist most commonly associated with Strange’s early appearance, none other than Steve Ditko!