Elektra: An Assassin’s Past

Learn the chaotic story of the shadowy warrior.

A mercenary ninja with a complex web of allies and foes, trained by the Hand, on the run from her past.

Elektra’s story began far from Las Vegas lights and noise, on a small Greek island, where famed businessman and diplomat Hugo Kostas Natchios and his wife Christina Natchios welcomed a daughter into the world. A fraught political climate led to the murder of Elektra’s mother, defining her early life with violence and destruction. After Christina’s death, Hugo implored her to train in self-defense as a martial artist.

After Elektra’s father became Greek ambassador to the United States, she traveled to New York to study law at Columbia University. There, she met fellow classmate Matt Murdock. The two grew close, attracted by each other’s’ simpatico physical abilities and dark beginnings.

A new life seemed to be dawning for Elektra, but the past repeated itself, and her father, like her mother, feel to violence from terrorists. In a haze of anger and regret, the young woman left New York City for the Mountain of the Chaste, a sacred enclave of mystical martial artists led by the master sensei, Stick.

The Chaste, entangled in an eternal battle with their spiritual adversaries, the Hand, accepted and trained Elektra. However, still imbued by the darkness and rage of her chaotic past, she broke away from the Chaste—and joined the Hand.

After studying both extremes of the martial arts, Elektra went rogue, leaving both the Chaste and the Hand, for a life as a freelance assassin. Now an expert-level martial artist, highly-advanced with a range of mystical abilities and blunt-force weaponry including her signature sai, Elektra’s mercenary work has brought her back to New York City more than once where she has often run afoul of her onetime love Matt Murdock, aka the hero Daredevil.

As her reputation grew across the globe, “Elektra” became more than just a first name, it became a title. Running from her tumultuous past, Elektra attempted to lose herself in a vibrant sea of neon, noise and anonymity: LAS VEGAS. But it was only a matter of time before her luck ran out, and her long and difficult history caught up with her.

Find out what happened to the scarlet assassin in ELEKTRA #1 by writer Matt Owens and artist Juann Cabal. 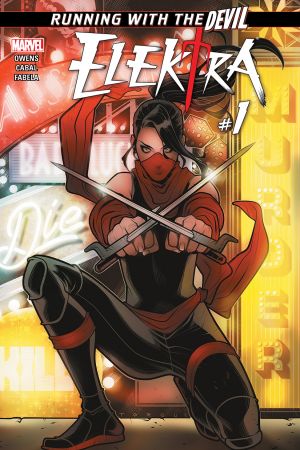 In this article: Elektra (Elektra Natchios)