Everything You Need to Know About Death's Head

Ryan "Agent M" Penagos explains why you need to pick up the new 'Death's Head' limited series by Tini Howard and Kei Zama!

DEATH’S HEAD #1, the first part of a limited series written by Tini Howard with art by Kei Zama, was released last week and we’re here to get you excited about it! Oh – are you wondering who Death’s Head is? Well, you’re in luck! We have an explainer for you right here so you can dive into this time-traveling cyborg tale!

Here’s a few things to know about Death’s Head:

He’s a robot bounty hunter, though he prefers to be called a “freelance peace-keeping agent.” Death’s Head was created by Simon Furman and Geoff Senior, first appearing in Marvel UK comics in 1987.

Death’s Head really gets around! His first major story appearance was in TRANSFORMERS #113 from Marvel UK, but his first actual comics appearance was in a one-page story by Furman and Bryan Hitch that appeared in a number of books beforehand. While he’s definitely a Marvel Universe character, he’s shown up in Transformers and Doctor Who comics – and he time travels! He’s fought Superior Spider-Man, the Fantastic Four, She-Hulk, and more.

We know he’s a “freelance peacekeeping agent,” but Death’s Head has worked for the Time Variance Authority, hence some of the time-travel shenanigans. That’s a whole other ballawax to talk about.

Death’s Head has also been through a few incarnations: He’s been a giant robot and a regular, human-sized ‘bot. There have also been Death’s Head II and 3.0 versions, but the original is still most beloved. Death’s Head II was my first introduction to the character, which was a reboot of the widely-released Marvel UK line in the early ‘90s. Death’s Head’s personality mixed with a cyborg named minion and some other mishigas. It’s a messed-up post-apocalyptic story with gooey Reed Richards in a jar, Rhino and She-Hulk as a couple, Wolverine busting his adamantium claws, and more. Loved it as a kid, but love all the original Death’s Head stuff I can get my paws on much more as an adult.

The original Death’s Head appeared in current Marvel Universe comics in the 2009-2010 S.W.O.R.D. series by noted British Bad Boy Kieron Gillen and artist Steven Sanders. He later showed up in the 2013 Iron Man story “The Secret Origin of Tony Stark” by Kieron Gillen and Greg Land.

In 2014, we had a crossover series called REVOLUTIONARY WAR featuring Marvel UK characters. The Death’s Head issue of the series has Death’s Heads 1 and 2 fighting and part of the larger story. 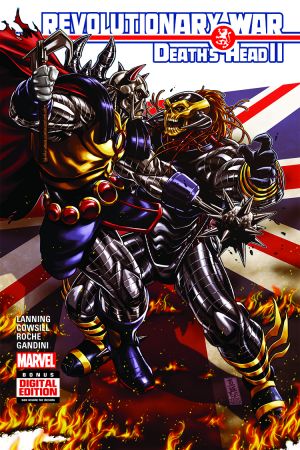 Where can read some of these issues?

You can read the more recent issues on Marvel Unlimited, but we don’t have a ton of the old UK stuff available digitally. But 1989's DEATH’S HEAD #10 is available on MU, which has Death’s Head vs. Iron Man 2020 by Furman and Hitch—and IT IS REALLY COOL. Plus a wild back-up story with OG Death’s Head and Death’s Head II! 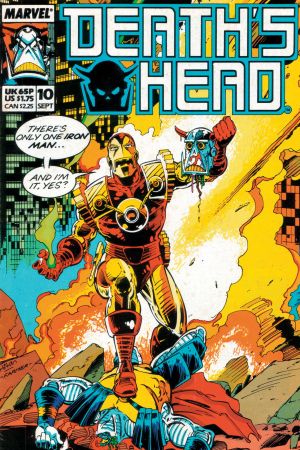 How about this new series?

The new series is GREAT! Here’s what writer Tini Howard had to say about Death’s Head:

“So I was drawn to Death's Head as a character that looks super powerful and tough but is... big. Clunky. Breaks easily. And his whole job is apprehending people for money, and if people with better tech surpass you in that, you end up... kind of broke, yes? Oh, also he's a GREAT BIG BOY with weapons. He has a Swiss Army knife for an arm that takes different attachments. Who wouldn't love that guy?”

Any familiar faces from the Marvel Universe?

Yes! Wiccan and Hulkling are in the book! Tini says, “It's really fun to put Wiccan and Death's Head together. They're so different, their powers occasionally cause problems for one another. They're such an odd couple, but they're really after the same thing – understanding their place in a world that makes them feel obsolete. Wizards and robots. Robots and wizards and their shape-shifting boyfriends. We got everything.”

Death’s Head is kinda dark, funny, quirky, out for himself/the cash, has an amazing character design, can fit into all kinds of stories, and you should love him.

DEATH’S HEAD #1, written by Tini Howard with art by Kei Zama, is available now online and at your local comic shop.

In this article: Death's Head (Minion)