Look back at Shatterstar's debut ahead of issue #2 of his new limited series, out next week!

Every week, we use the powers of Marvel Unlimited to celebrate a major character's first appearance in the mighty Marvel Universe.

Last month, Tim Seeley and Carlos Villa cut deep into the life of the mutant clone from another dimension known as Shatterstar. And next week, SHATTERSTAR #2 appears on stands, so in celebration, we're taking the opportunity to look back at the character's debut!

The warrior made his first appearance in the pages of 1991's NEW MUTANTS #99 by creators Rob Liefeld and Fabian Nicieza. Leading up to that issue, Cable had traveled back from his future to the present, seen the New Mutants working together, and decided to turn them into soldiers in his militaristic mission for the preservation of mutants.

In issue #99, Cable made his pitch to Warpath about sticking with the group as Sunspot bailed. The team seemed ready to fall apart at any moment and the issue ended with a two-panel page featuring Feral wondering if she could join up and...an unconscious white-clad warrior with a sword in the danger room!

Shatterstar awoke in the following issue, which also happened to be the finale of NEW MUTANTS. As the ish kicked off, Cable and Warpath ran to the training simulator to find the intruder working out with the system. He shrugged both of them off fairly easily, but had a bit more trouble taking on Domino.

Cable stepped in long enough for Shatterstar to describe himself as "a Blood Warrior of the Cadre Alliance" just before getting knocked unconscious with his own sword by the metal-armed time traveler. Not long after that, Shatterstar woke up in the group's medical station and explained that the Cadre Alliance sent him to find the X-Men to help them fight against Mojo V, a villain from Mojoworld 100 years in the future. 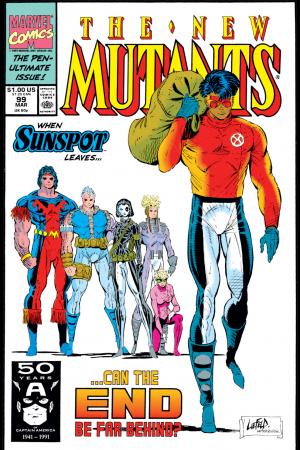 Realizing he hadn't found the actual X-Men and that the equipment that would allow him to return home had been destroyed, Shatterstar felt like an stranded failure.

While half the team responded to Feral's sudden appearance, Shatterstar, Domino, and Warpath fought against Mojo V's agents, members of the Imperial Protectorate, who wanted to get their hands on the bio-engineered interdimensional fighter. After the rest of the team appeared, Shatterstar showed off his toughness by stabbing one of the attackers—through his own body!

After all the craziness, Cable held a meeting with the assembled Super Heroes to discuss their missions. He agreed to help Warpath, Feral, and Shatterstar with their own personal vendettas in exchange for their assistance in creating the army he knows he needs to defend mutantkind. With the new team established, Cable further explained that the time had come for them to move out of the Xavier School and become a fighting force to honor Xavier's dream. Their adventures continued in the pages of X-FORCE, a series that Shatterstar became a cornerstone of.

However, it would be a while before Shatterstar got back to the Mojoverse. In fact, the first few X-Force missions revolved around taking on Cable's enemies in the terrorist group the Mutant Liberation Front, as well as Stryfe, a clone of Cable with nefarious intentions.

At the end of the first issue, readers got a glimpse at Cable's files on the variety of new characters he found himself surrounded by. In his entry on Shatterstar, he revealed his own intentions when it came to actually helping the visitor. "In return for his services in our fighting unit, I have promised him that we will aid his cause. I just never told him when." He went on to explain that he and X-Force's need for Shatterstar exceeded that of his homeworld.

After all these years, Seeley and Villa plan to make good on Cable's promise by digging into Shatterstar's past to see how that shapes his present and future.

In this article: Shatterstar