Discover how the thought-dead clone has complicated Spider-Man’s story!

Every Friday we use the powers of Marvel Unlimited to look back at the very first appearances of a major character, place, or object that made waves this week.

They say that imitation is the highest form of flattery. If that’s true, then Peter Parker must be the most beloved person in the world. Just look at how many times he’s been cloned! This week one the most famous—and infamous—representatives from that group launched his own series with BEN REILLY: SCARLET SPIDER #1 by Peter David and Mark Bagley!

Originally created by Gerry Conway and Ross Andru in AMAZING SPIDER-MAN #149 from 1975, the clone who would be Ben Reilly came about thanks to the machinations and twisted science of The Jackal. Peter first met his clone—who also sported the original’s memories and morality—at Shea Stadium, surprised first to see someone in his costume and even more so when that person shared his face! 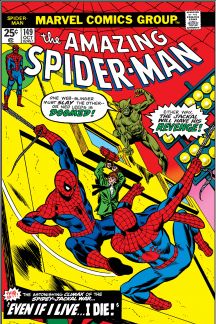 The copy seemed to die in an ensuing explosion and Peter dropped the body down a smoke stack to avoid answering too many questions. Aside from an appearance in WHAT IF? #30, that proved it for the unnamed clone until he made a reappearance nearly 20 years later, first as Ben Reilly in SPIDER-MAN #51, and then as the heroic Scarlet Spider WEB OF SPIDER-MAN #118.

A back-up story in SPECTACULAR SPIDER-MAN #223 explained that, after seemingly dying, the clone crawled out of the smoke stack, decided not to take over Peter Parker’s life and then went out on his own. You also see him taking the designation Ben Reilly for the first time in that story as he explained that he took his uncle’s first name and his aunt’s maiden one.

At first, Ben tried to work alongside Peter as an arachnid-themed hero. The two traded off on the Spider-Man identity as Mr. Parker found himself dealing with a series of rough times including the loss of his powers. At one point, Ben and Peter even believed that they’d switched places all those years back and that the clone had gone on to star in all the comics fans read for two decades. Eventually the truth came out that the webslinging duo had been fooled, but that still left two heroes running around New York City—until SPIDER-MAN #75 hit and Ben Reilly once again died trying to save Peter’s friends and family from The Green Goblin. 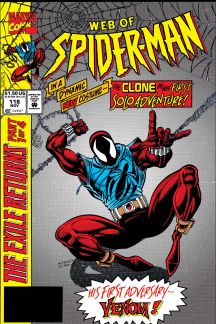 Once again, it seemed Mr. Reilly would rest in peace until the events of the Clone Conspiracy event that wrapped up just recently. As it turned out, Jackal killed and recreated Ben Reilly so many times that he lost some of his sanity and decided to create New U Technologies and also bring back just about every dead person in Peter’s life, while masquerading as his creator. Ben survived the virus that took out most of the clones and now runs around Las Vegas in a cosplayer’s suit, charging the people he saves in his new ongoing series.

If you’re curious about the Clone Saga, but don’t feel like diving into several years’ worth of stories, the original tale’s architects Howard Mackie and Tom DeFalco re-teamed in 2009 for SPIDER-MAN: THE CLONE SAGA. The six issue limited series drawn by Todd Nauck presents the story as they original intended to tell it, but distilled down into a few concise parts!