She might lead Generation X today, but she got her start in a mall!

She’s been an X-Man, a New Warrior, a mom, and a vampire, and now Jubilation Lee serves as the leader of a group of mutant misfits in the pages of GENERATION X by Christina Strain and Amilcar Pinna. Before all that, though, she started as a homeless mall rat with mutant powers showing off to small crowds in the pages of UNCANNY X-MEN #244 by Chris Claremont and Marc Silvestri. Unlike some of her fellow mutants, she seemed to know exactly what her mutant ability entailed, namely the power to control “articulate, quasi-animate, transitory plasmoids.”

Not everyone at the Hollywood Mall enjoyed her displays, though, especially the security guards who patrolled the place. She gave them the old razzle-dazzle before announcing her code name and then tumbling her way out. Thanks to interference run by nearby skaters and some more impressive acrobatics, she got away. All of this made the head rent-a-cop so mad that he called in a group of mutant hunters called M Squad. 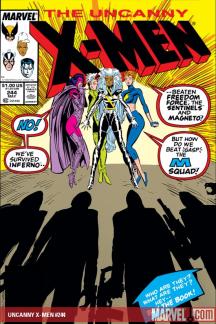 At this time, the X-Men lived in the Australian outback, an arrangement that seemed to grate on more than a few members. To help alleviate the stress of devoting their entire lives to saving a world that hates and fears them, Dazzler, Storm, Rogue, and Psylocke decided to go shopping at the very same establishment that Jubilee previously parlayed her powers thanks to a portal provided by Gateway.

After a bit of shopping fun, the X-Women retired to a joint called Hotbods, which triggered an alarm on the hapless M Squad’s equipment. First, they ran into Jubilee though and fired on her, which drew the attention of our heroines. They made short work of the goons and had Gateway open up another portal home, but Jubilee jumped through to join them in the next issue!

Over the years, Jubilee went from new kid on the block—and Wolverine’s protégé—to the experienced member of the original Generation X team. Since then she’s served on her fair share of X-Squads, but lost her powers on M-Day. After trying to use tech to recreate those abilities, she got turned into a vampire by Xarus instead.

With some help from her friends she’s gotten the vampirism under control and even adopted a baby named Shogo who will go on to become a great hero, at least in one possible future. Now she’s juggling all that while playing mentor to some of the more fringe students at the Xavier Institute for Mutant Education and Outreach located in New York City’s Central Park.

Jubilee jumped onto the comic scene in 1989, making her one of the marquee teen characters of the franchise when the “X-Men” animated series launched on Fox in 1992. The show even used her as the point of view character for the audience, basing part of the first two-part episode, “Night of the Sentinels,” around her. Much like in her first comic appearance, she started out in a mall, though this time Sentinels broke in and attacked. Also, the entire X-Men team jumped in to save her. Over the course of the show’s five-season run, Jubilee became an integral part, even mirroring her comic relationship with Wolverine.