As Kraven the Hunter sets his sites on Captain America, we paint a target on his first appearance!

Mark Waid and Chris Samnee are not taking it easy on Steve Rogers. As the Home of the Brave story launched its third part in CAPTAIN AMERICA #697, the shield-slinger found himself in the crosshairs of the most dangerous hunter in the Marvel Universe, Sergei Kravinoff.

He debuted way back in 1964’s AMAZING SPIDER-MAN #15 simply as Kraven, the Hunter on that issue’s cover. The story itself, by Stan Lee and Steve Ditko, began with Spider-Man rousting a bunch of mobsters. One of them escaped his flytrap and turned out to be none other than the Chameleon! 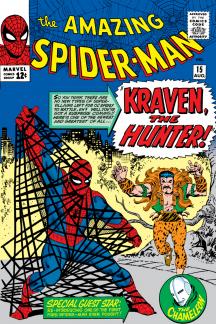 To keep Spidey out of his business, Chameleon contacted his old friend — and eventually revealed as his second cousin — Kraven the Hunter! A known celebrity, his presence in New York City caused enough of a stir that J. Jonah Jameson covered the story himself and asked for Peter Parker to shoot the event.

After showing his prowess with animals by subduing escaped snakes and gorillas, Kraven flat-out told JJJ that he arrived in the Big Apple for one purpose: to hunt Spider-Man.

From there, the Hunter secretly met up with the Chameleon. While there, he explained how he’d gotten his advanced powers: “I possess undreamed-of strength and speed, which I obtained by drinking a secret potion, stolen from the witch-doctor of a hidden African tribe!”

Kraven shifted from reading about Spider-Man to watching him in the act as he took on a group of thugs hired for this exact purpose by Chameleon. Immediately after, the two came to their first round of blows with the Hunter displaying a far superior fighting style. Kraven won the fight by using a potion on the wall-crawler and then letting him escape to enhance this game of cat and mouse.

The next day, Peter felt better but still had the shakes from Kraven’s poison. Later on, Spidey put a tracer on his new enemy, but wound up following him right into Central Park. Or so he thought!

He actually tracked Chameleon dressed as Kraven while the real Hunter skulked behind them. The wall-crawler got snared in a net trap, but used his strength to break free. He had more trouble with the wrist and leg cuffs that developed a powerful magnetic attraction to each other. Even shackled like that, Spidey managed to knock Chameleon out, dodge a variety of other attacks, and ultimately, entrap Sergei in a huge web. At the end of the issue, our hero watched as the two villains got on a boat for deportation setting the seeds for his newfound hatred of the super human community.

Kraven’s most well-known for going up against our friendly neighborhood Spider-Man, but this attempt on Captain America’s life is not the first time he’s branched out. Heck, it’s not even the only time he’s appeared in the same issue as Cap! In fact, in his second appearance ever — TALES OF SUSPENSE #58 — Kraven teamed up with Chameleon again and stumbled right into Iron Man who took the Hunter out. Kraven didn’t partake in the title battle between Iron Man and Captain America, though. Instead Chameleon played with Iron Man’s mind so that he would attack the Sentinel of Liberty while under the impression that the identity-stealing villain had taken over the real Cap’s body.