The ruler of Mojoworld proves that vapid, awful personalities can hold places of obscene power.

Last week the Mojoverse invaded Manhattan and all hell broke loose. The action moved from X-MEN: GOLD #13 to this week’s X-MEN: BLUE #13 and along with it came a variety of former foes all conjured up by the villain himself, Mojo.

It’s fitting that Art Adams worked on connecting covers for the first two parts of this crossover because he drew Mojo’s very first appearance back in the LONGSHOT limited series, penned by the equally legendary Ann Nocenti. That 1985-1986 book first introduced us to the amnesiac title character who seemed luckier than the average runaway.

Longshot wound up on Earth where he began remembering bits and pieces of his past which included being grown in an alternate dimension to serve the huge Spineless Ones who used large machine walkers to get them around. Seeing those beings paved the way for Mojo’s grand debut in #4 as he complained about plant-ruining holes in clouds to Major Domo. 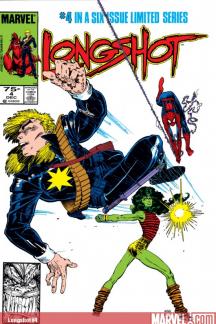 The out-of-control ruler of all he saw with a mouth that wouldn’t quit wanted everything around him to look like his own reflection, thus becoming godlike in his own mind. He’d also sent out a pack of his best hunters, including Quark, to track down Longshot, not wanting to lose his own property. When they failed, Mojo ordered Spiral to take them both to this mysterious planet filled with humans that looked exactly like their genetically created slaves.

As it turned out, those slaves were designed to reflect The Spineless Ones’ nightmare demons of myth, so this whole Earth thing really freaked them out. After jumping from Earth and otherspace back to Mojoworld, the Spineless One finally faced off against Longshot and it didn’t go so well for the villain. Instead of ruling completely, he found himself on the wrong side of a dimensional portal.

Mojo and Spiral would later appear in a series of X-related annuals in the mid-to-late 80s. First, they popped up in NEW MUTANTS ANNUAL #2 to kidnap Betsy Braddock, otherwise known as Psylocke in her original body. He used Betsy to create a new cartoon that was then broadcast to humanity, called Wildways. After Mojo also grabbed Sunspot the New Mutants became involved and eventually put a stop to his plans. 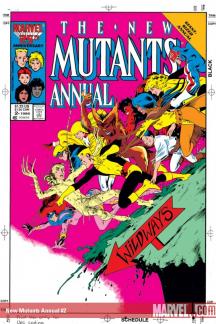 Over the years, Mojo solidified himself as one of the most deranged and heartless villains in the Marvel Universe by routinely trying to invade our reality or poison his own with the kind of television programs that, well, have become fairly commonplace these days.

Though an absolutely egomaniacal monster, Mojo did help create something of adorable beauty: the X-Babies! In UNCANNY X-MEN ANNUAL #10, by Chris Claremont and Art Adams, Mojo de-aged the X-Men to look like kids. However, two years later in UNCANNY X-MEN ANNUAL #12, when the X-Men appeared to have died, he created the X-Babies. As you might expect, the cartoony kid heroes eventually fought back against their creator. Mojo thought about giving them the axe himself, but decided against it when the ratings showed just how popular they turned out to be!