Kurt Wagner bamfs his way into our hearts and minds in GIANT-SIZE X-MEN #1!

Everyone’s favorite teleporting, blue, furry hero has been working hard for mutant equality in the pages of X-MEN: GOLD since the series launched earlier this year. In this week’s issue, #18, Kurt Wagner came to the forefront as a captive of the Dartayan Empire and even had a nice shot on the cover.

With that in mind, it’s the perfect time to look way back to 1975 when the elf made his very first appearance alongside his fellow new X-Men: Storm, Warpath, Colossus, Storm, Banshee, Sunfire and that guy Wolverine who debuted over in INCREDIBLE HULK in the pages of GIANT SIZE X-MEN #1.

Readers of that classic issue by Len Wein and Dave Cockrum will remember that Nightcrawler earned the first spotlight in the issue back in Winzeldorf, Germany. The usually quiet place soon found itself up in arms as the townspeople chased poor Kurt Wagner filled with hate and fear.

He mulled all of this over as he ran, thinking, “The fools! It is they who are the monsters – they with their mindless prejudices.” He also recounted a history that we wouldn’t see fleshed out until later, including time spent as a carnival performer.

Kurt used his incredible acrobatic abilities to avoid their pitchforks and torches for a while, but eventually fell into the growing crowd below. They probably would have succeeded in their attempts to destroy this kind-hearted individual had Professor X not appeared seemingly out of nowhere and used his own incredible mental abilities to stop them dead in their tracks. 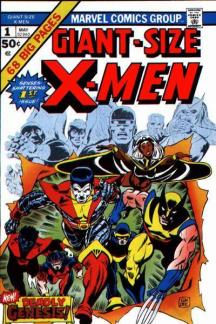 As confused as his attackers, Nightcrawler stood and watched in awe as Charles Xavier offered him a place on his team as well as one at his school. Once the new team fully came together, they learned that the original X-Men — along with Polaris and Havok — had gone missing on the mysterious island of Krakoa. Professor X assembled this new batch to help save the previous one.

On the island itself, Nightcrawler teamed up with Sunfire to infiltrate the south side. Though they didn’t exactly get along, they used their abilities to survive the descent through killer birds.

Upon reuniting the team, they all ran in to save the trapped X-Men only to learn that their enemy turned out to be Krakoa himself! Alongside his new teammates, Kurt fought valiantly to stop the strange mutant. As you know, Nightcrawler would become a stalwart member of the X-Men, continuing his adventures in the main series starting with UNCANNY X-MEN #94.

If you’re looking to dig into Nightcrawler’s world, there are plenty of options. In addition to his various appearances in X-books, he’s also earned the spotlight himself on a few occasions. To get a solid look at his early days, you can read the X-MEN ORIGINS: NIGHTCRAWLER one-shot from 2010 by Marc Bernardin, Adam Freeman, Cary Nord and James Harren. The tenacious teleport has also starred in two of his own solo series. The first ongoing NIGHTCRAWLER comic ran from 2004-2005 thanks to creators Roberto Aguirre-Sacasa and Darick Robertson. From 2014-2015, Chris Claremont, Jamie McKelvie and Todd Nauck chronicled NIGHTCRAWLER‘s adventures for another dozen issues.