Head on back to the first Power Pack appearance thanks to Louise Simonson and June Brigman.

Comics might not just be for kids anymore, but it’s important to have some that they can read. That was part of the mission statement when Louise Simonson and June Brigman launched POWER PACK in 1984.

With POWER PACK #63 hitting stores earlier this week, it seemed like the perfect time to take a look back at the Power family’s first foray into the world of super heroics. 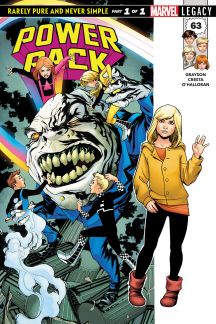 In that debut issue, we met Alex, Julie, Jack and Katy Power, a quartet of siblings living with their folks. One night they decided to sleep outside in an effort to see the reported UFO soaring through the skies. The plan worked as one such ship washed up on the beach outside their house while another landed, revealing its pilot Aelfyre Whitemane. 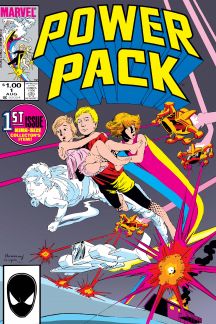 Another ship unleashed the Snarks, lizard-like aliens, who captured the Power parents. Whitemane later explained that the Snarks wanted their dad because of his work on a matter/anti-matter converter machine. While Whitey’s planet used the process to power their planet, the Snarks intended to wield it as a weapon!

Worried that he would soon die, Whitemane figured out a way to transfer some of his powers to the children before disappearing and leaving them to face a vicious alien race with no clue about their new abilities.

Luckily for the galaxy, the kids figured out their powers and got to work sending the Snarks packing – at least for now – before coming up with appropriate code names! Alex went with G because of his gravity control, Julie became Lightspeed because she flew with a rainbow of light behind her, Katie dubbed herself Energizer because of her energy powers and Jack decided on Mass-Master!

The Power Pack would go on to get their own unique costumes and become a well known name in the Marvel Universe, working with the likes of Spider-Man, Cloak and Dagger, the X-Men and even a few Asgardians. Along the way, the series tackled important social issues of the day as well ranging from homelessness and drug abuse to orphan-hood and kidnapping.

The original POWER PACK series ran until #62 in 1991, but the kids continued appearing throughout the years. They scored new limited series’ in 2000 and 2005 not to mention other books like SKRULLS VS. POWER PACK, WOLVERINE/POWER PACK, SPIDER-MAN AND POWER PACK and even HULK AND POWER PACK. The title and these characters still remain one of the best gateways to get kids into comics. All you have to do is find the right book!

While the Power Pack team hasn’t remained at the forefront of comics over the past few decades, some of its members have kept a relatively high profile. Julie helped found Excelsior over in RUNAWAYS before joining up with the Avengers Initiative and appearing in AVENGERS ACADEMY. Meanwhile, Alex joined up with Reed Richards’ Future Foundation in the pages of FF where he and the other geniuses tried to solve some of the biggest problems in existence.