Find out how the original Nova went from average kid to human rocket!

One of the best parts of long-running shared super hero universes is getting to see characters go from inexperienced newbies to universe-saving heroes. That’s been the case with Richard Rider, better known as Nova. In this week’s NOVA #6 by Jeff Loveness and Ramon K. Perez, readers found out even more about his time away in the Cancerverse; while looking back at his six years away from the spotlight, why not go all the way back to his first appearance?

Richard Rider debuted in NOVA #1—from 1976 by Marv Wolfman and John Buscema—losing a basketball game for his team behind Harry S. Truman High School. Quickly we met his friend Ginger and tormentor Mike. Feeling depressed, ineffectual, and common, Rich sat at Uncle Fudge’s with Ginger when he got zapped by a shattered Nova flying near Earth. The being transferred his power to Rider in hopes that the young man could stop the world-destroying Zorr.

After spending some time in the hospital and getting a feel for his powers, Richard fought Zorr, but ultimately the previous Nova teleported the villain to his ship to disintegrate him himself, leaving his would-be successor with more than a few questions. That first appearance set up everything from Rich’s self-described inferiority complex, to his human rocket powers, to the connection to other Nova Corps members out in space, and even his iconic catch phrase “Blue Blazes!”

That first solo series went on to pit the new hero against bad guys like Condor, Powerhouse, Diamondhead, Sphinx, and even a brainwashed Thor as his solo exploits continued until its 25th issue. Still out in space at that time, he appeared in a few other books, including ROM #24, which saw him give up his powers on Xandar after defeating invading Skrulls. He kicked around for a while, thinking his abilities really had gone until NEW WARRIORS #1, when Night Thrasher drops him off a building and they return! 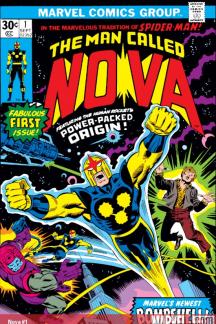 Richard became an integral part of the New Warriors as their series ran from 1990-1996. During that time, he also gained another solo series, this one going from 1994 to 1995. Both books worked to flesh Rich out and offer even more information about his place in the universe.

After some time out of the spotlight, Richard Rider came back in a big way thanks to the Annihilation event. In the pages of ANNIHILATION: PROLOGUE and ANNIHILATION: NOVA, Rider not only defended the entire Nova Corps Worldmind, but also worked against the Annihilation Wave moving on to the main series, ANNIHILATION. Writers Andy Lanning and Dan Abnett carried through into the 2007-launching series that ran for 36 issues.

Up until this current run, Rider hadn’t been seen since he, Star-Lord. and Drax trapped themselves in the Cancerverse with the title villain at the end of THE THANOS IMPERATIVE. Readers got a little more information about how Nova helped get his friends out in the pages of GUARDIANS OF THE GALAXY #18–20. Not bad for a kid from Long Island who thought of himself as ineffectual and as far from special as possible.

Did you know that Richard Rider almost had a Marvel Comic? “Sure,” you’re thinking, “He had plenty!” That’s true, but he almost got one in continuity as seen in the pages of NOVA #5. Marvel Comics existed within the 616 universe, producing books based on Captain America, the Fantastic Four, Dracula, and others. In this issue, Richard heard that the editors were looking to meet with him to pitch a book to Stan Lee! He went to the offices and even met with a couple of guys named Marv Wolfman and Sal Buscema. They wanted a demonstration of his powers, which led into a battle with a giant robot, but ultimately, Stan nixed the book in favor of something called MIDAS THE MILLION DOLLAR MOUSE.